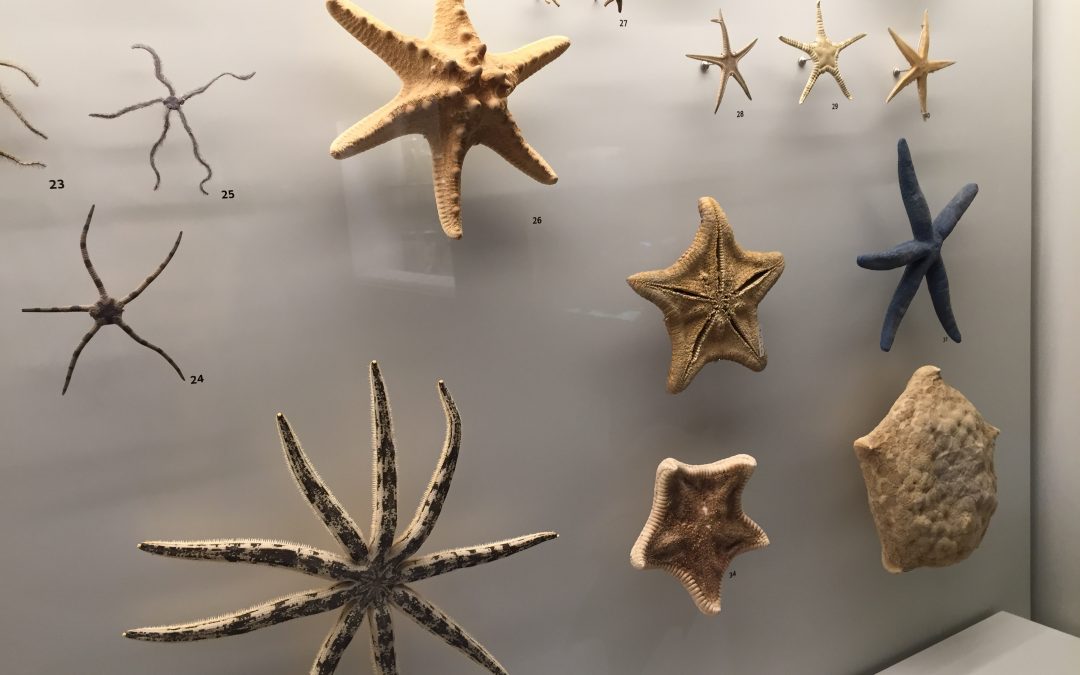 In taxonomy, the ‘holotype’ specimen can be considered the cornerstone of a species description – the single physical example of an organism, known to have been used when the species was formally described.

When this specimen goes missing the foundation upon which a species’ taxonomy is built becomes shaky and can hinder further efforts like new species descriptions and modifications to higher level taxonomy, with potential implications for conservation efforts down the line.

This was the unfortunate situation for the echinoderm genus grouping Asteroschema: the global taxonomic schema was missing a ‘building block’ – the holotype.

This state of affairs for the brittle star grouping changed unexpectedly in 2009, according to Dr Jennifer Olbers a Marine Ecologist at Ezemvelo KZN Wildlife.

A curious ‘orphan collection’ was discovered at the Durban Natural Science Museum. 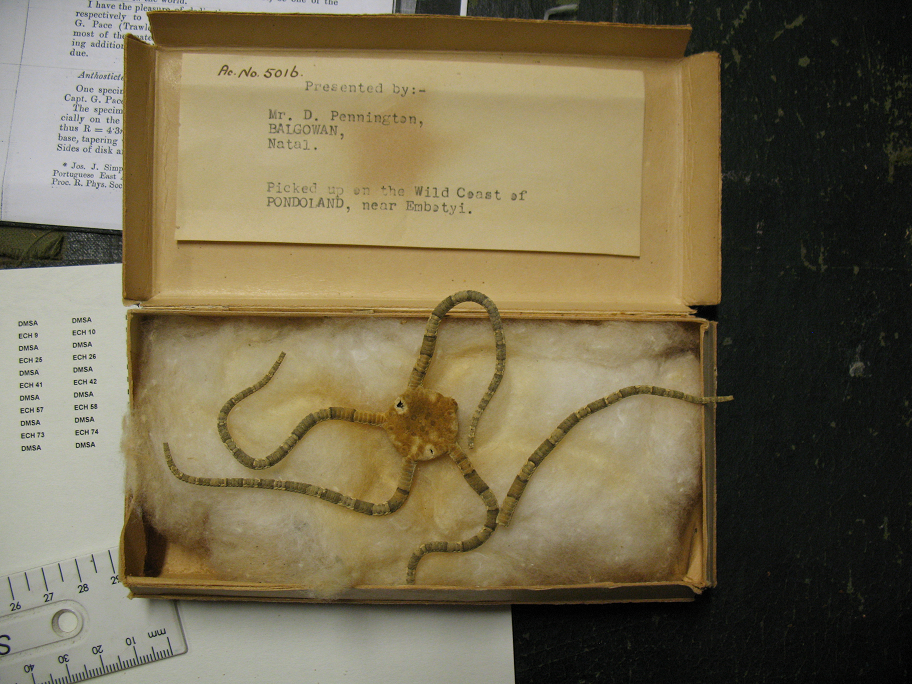 According to the literature the holotype of Asteroschema capensis was located at the Durban Natural Science Museum, deposited 93 years ago in 1925 by one Theodore Mortensen but searches by Olbers and various other international brittle star taxonomists yielded no information or luck in locating the specimen.

“It was only by chance that Mrs Mariana Tomalin, a volunteer working in the taxonomic collection at the Durban Natural Science Museum in 2009, opened a cupboard to be surprised by a stuffed lion which was aptly guarding the small but important and significant echinoderm collection,” Olbers told the FBIP. 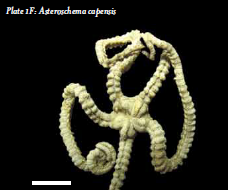 An orphan collection in this context means that there is no dedicated curator.

“In this case, the Durban Natural Science Museum do not officially house marine specimens but because this collection holds type material, they keep them instead of sending them to larger collections,” said Olbers.

The scientific community was notified about the rediscovery of the collection in the DNSM Novitates journal.

The discovery of the collection, particularly the Asteroschema capensis holotype specimen, has injected new energy into taxonomic work within the echinoderms, and more specifically the snake star group, Asteromorpha.

In 2013 Olbers and two Japanese colleagues published a ‘Taxonomic Review of the Genus Asteromorpha’ in The Raffles Bulletin of Zoology.

The authors highlighted the fact that “some species of Asteroschema may in fact be Asteromorpha” and that the prior studies had questioned the taxonomic position of the former. Additionally, Asteroschema capensis’ similarity to Asteromorpha had never been discussed.

The snake stars of the genus Asteromorpha are known from deep waters (75-382m) of the south-western Indian Ocean off Reunion Island, and from the south-western Pacific Ocean, eastern Indonesia and eastern Australia.

The rediscovery of the A. capensis holotype gave Olbers and her colleagues the opportunity to re-evaluate the species morphology, particularly the “oral bridge” and “arm spines”, and conclude that “A. capensis should be transferred to the genus Asteromorpha of the family Euryalinae”.

According to Olbers the rediscovery of the echinoderm collection and subsequent taxonomic revision highlights the “ever-evolving” nature of taxonomy as new information, techniques and new species are found and developed.

Countries should compile and update a list or inventory of all species that have been recorded or occur in that country, with the correct name for each species. The change to the placement of A. capensis was captured in the national checklist of Echinodermata as part of the SeaKeys project, which was funded through the Foundational Biodiversity Information Programme (FBIP).

Dr Kerry Sink, leader of SeaKeys, said the project enabled the networking of taxonomists through its ‘taxonomic working group’ and facilitated the inclusion of the information in national marine lists. This story highlights the value of collaboration and networking as well as the collections housed in museums which form the basis for organising and making sense of the millions of species on earth.

Rediscovery of a Collection of Echinoderms by Dane McDonald on Scribd