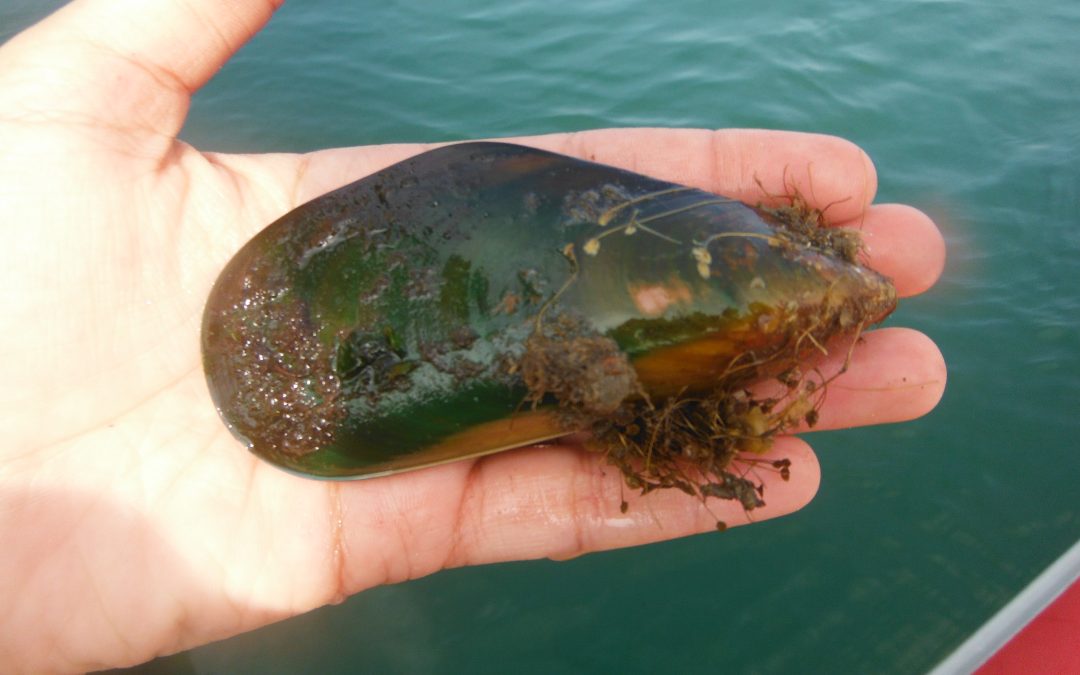 Cape Town – A study, using genetic analysis, on the invasive Asian green mussel in South Africa has turned earlier reports on their head with an unexpected discovery.

Biological invasions pose a significant threat to South Africa’s ecosystems and the services such as clean water, air, and biodiversity that they deliver.

In the case of the invasive Asian green mussel there is the concern that populations can balloon leading to ecological and/or economic damage and the displacement of native species.

The study by a team of University of Cape Town researchers was published in the African Journal of Marine Science under the catchy title “The invasive Asian green mussel Perna viridis in South Africa: all that is green is not viridis”.

Lead author on the study Jessica Micklem says invasive mussel species always spark a concern especially after the case of the invasion by the zebra mussel in the United States whose management costs billions of dollars.

Concerns about an Asian green mussel invasion in South Africa led Micklem and her colleagues on a path to verify two reports of the species in the country – East London and Port Elizabeth – and to verify the extent of distribution.

The research team surveyed six different harbours, of which two were the sites of the previous recordings or observations, and collected green or greenish mussels at all the harbours. 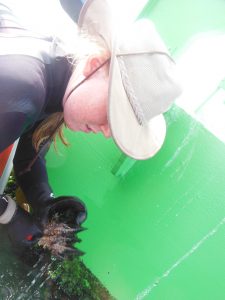 Micklem looking for and finding green mussels in Durban.

The next phase of the investigation was carried out at the South African Institute for Aquatic Biodiversity (SAIAB) in Grahamstown where Nox Ntuli, a National Research Foundation (NRF) intern, and Dr Monica Mwale  from the National Zoological Gardens of South Africa performed genetic tests on the 60 collected mussel samples but only 32 could be identified. 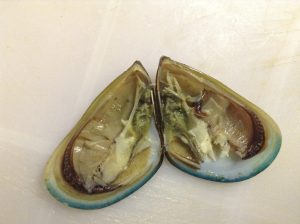 Taking a sample of P. perna tissue for genetic analysis

Upon receiving the results Micklem found that most of the green mussels (30) were the native species, Perna perna (the brown mussel), which can also be green while one was identified as P. viridis and the other as Mytilus galloprovincialis. 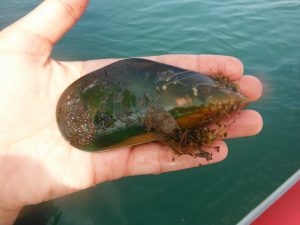 The team thought they had found P. viridis but this one turned out to be a P. perna despite its green colour.

Contrary to invasive species, native species have developed and adapted to their normal ecosystems over thousands (often millions) of years, and can be assisted by or affected by a new introduced species.

“In all of the literature earlier researchers have warned that the green mussel (invasive) could also have very little green and be mostly brown but no one mentioned that the brown mussel (native) could be green,” Micklem said.

The situation sent Micklem back to the literature to see whether there were other observations to determine the differences between the two species besides colour. She found two; the ‘pallial line’ and ‘frilly mantel’. 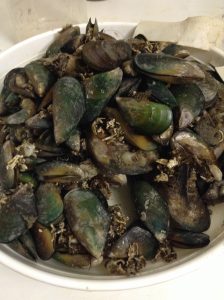 Micklem had to go back all of her samples check mantel of each. All the mussels in the image are green P. perna. 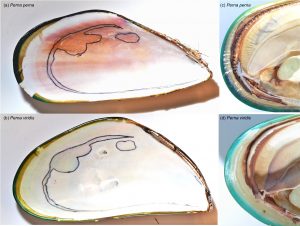 The frilly mantel was the most obvious sign so she went back to all 60 samples she had collected and found 5 more – from the Durban locality – that were identifiably the invasive P. viridis. These were sent to SAIAB for genetic confirmation and were found to be the invasive species.

The new finding overturns prior reports of the invasive green mussel being found at East London and Port Elizabeth, and yielded a positive identification for Durban.

Durban marine conservation authorities will have to keep tabs on Perna viridis despite Micklem’s projection that possible damage in the short term is minimal. She warns, quoting literature, that “the Asian green mussel grows faster, bigger and can filter twice as much water as P. perna, as well as having a higher feeding rate and food ingestion rate than any other filter feeding bivalve”.

The study demonstrates the power of genetic analysis in answering questions in invasion biology and was partially funded by the Foundational Biodiversity Information Programme (FBIP) SeaKeys project.