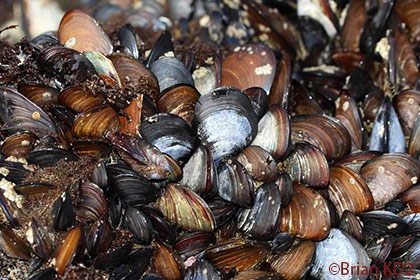 According to Stellenbosch University researcher and co-author on the study, Dr Tammy Robinson, invasion biology (until recently) has focused on the ‘low hanging fruit’.

“The easy topics have been well studied but now we need to move beyond this,” she told the FBIP.

“It’s also because the topics connected to old school ecology have been well done.”

Robinson said that until recently the field had no dedicated marine invasion biologists – rather marine ecologists ‘dabbled’ in invasion questions that were aligned to their marine ecology interests. 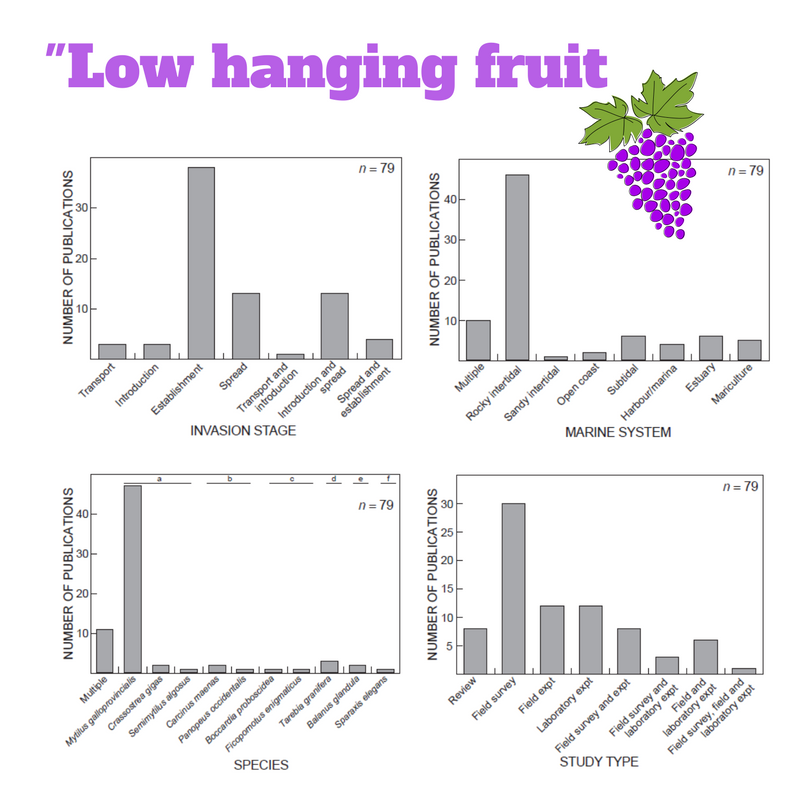 Graphs illustrating research bias across a sample of 79 publications under four categories. Tall bars indicate extensive research for a given metric.

‘Transport and introduction’ of species to new locations are arguably the most important steps on which to focus the management of invasions by alien invasive species, yet research in the field has overlooked this step over the last 20 years.

According to Robinson ‘transport and introduction’ is crucial because ‘prevention is better than cure’, a common adage in invasive species management, where eradication becomes less and less feasible as invasions progress.

According to the study published in the African Journal of Marine Science “of the 57 papers that considered a single invasion stage (i.e. transport, introduction, establishment or spread), the significant majority focused on establishment (38) followed by spread (13), whereas transport and introduction were addressed in only three papers each”.

The study formed part of the Foundational Biodiversity and Information Programme’s (FBIP) SeaKeys project – a large collaboration that aims to collate and increase marine biodiversity information in service of society.

The study researchers tracked 79 papers published on the subject in the past 20 years. For each publication a variety of metrics were extracted, including the geographic focus of the study, invasion stage considered, marine system under consideration, target species, type of study and whether impact has been assessed.

“The focus of published research show a strong bias towards rocky intertidal systems…many of these studies pertain to the biology and life history of [the abundant invasive Mediterranean mussel] Mytilus galloprovincialis,” according to the study, which also reported that there was a bias towards ‘field surveys’.

The study authors believe that the information produced by the study “will provide vital support to invasive species management”.

“It highlights the gaps in current knowledge, making it easy for researchers to align their work with topics needing attention,” Robinson said.