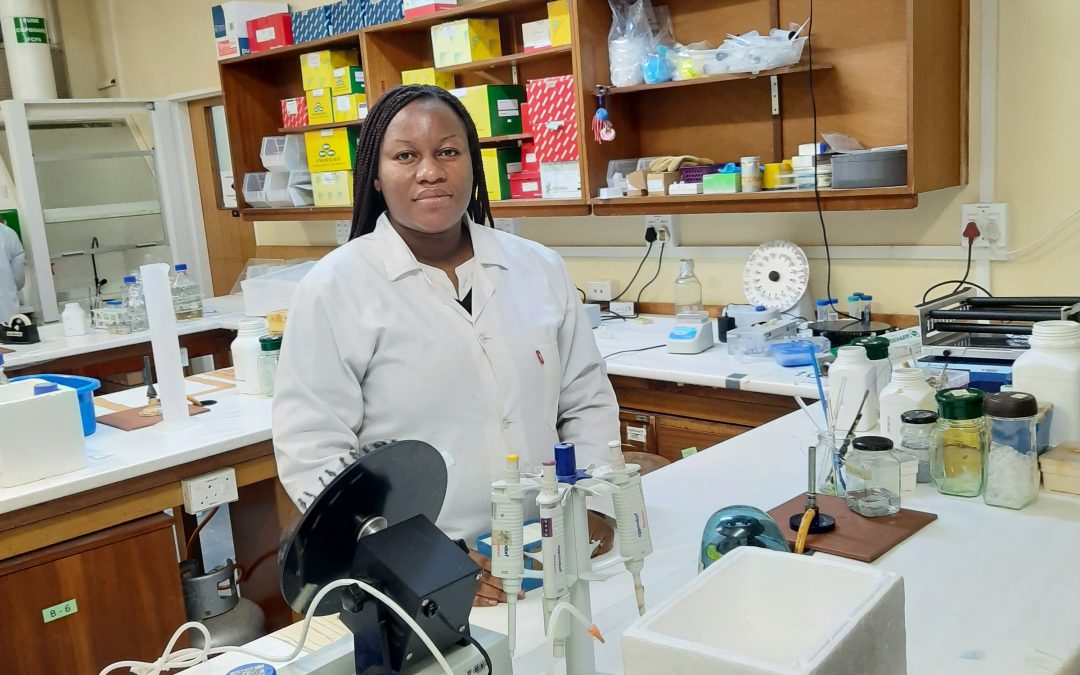 Makasithembe Dube is 35 years old and currently in the 3rd year of a PhD in Microbiology. She has a great interest in a career in research in the disciplines of molecular biology and microbiology.

From the first time she was exposed to a microbiology laboratory a couple of years ago she knew that it was the career path for her.

“A career in research excites me because it is intellectually stimulating and rewarding, you get to make discoveries and come up with solutions to real-world problems,” she says.

What is Makasithembe’s PhD project about?

This study forms part of the FBIP funded project entitled, ‘Defining functional microbiomes of two major crops in South for improved productivity’. This is an FBIP Large Project (Principle Investigator: Prof Karin Jacobs) with Prof Dames as a co-investigator and through which Makasithembe receives an NRF grant-linked bursary.

The majority of plants worldwide are associated with mycorrhizal fungi. The soil fungi form an intimate relationship with plant roots enhancing nutrient acquisition and growth.

The natural relationship is mutually beneficial with the fungi being supported by sugars produced through photosynthesis. There are different types of mycorrhizal associations with the arbuscular mycorrhizal (AM) fungi interacting with many economically important crop plants.

The success of this interaction can be negatively impacted by several agricultural practices. The objective of this research work is to assess the mycorrhizal fungal biodiversity associated with wheat under conventional and conservation agricultural management practices.

Results from the initial assessment of the mycorrhizal status of soils and wheat roots sampled from selected wheat fields revealed an average AM spore count of 121 per 50 g soil with percentage AM root colonization (Fig. 1a) ranging from 0-63%, while the overall concentration of glomalin related soil protein was 22.02 mg per g soil. Glomalin is a glycoprotein produced by these fungi and deposited in the soil, improving soil structure.

A culture independent approach has been followed to assess AM fungal diversity as these fungi cannot be cultured on artificial media. The sequences generated through Next Generation sequencing are currently being analyzed.

Preliminary results indicate that 99% of the top 50 Operational Taxonomic Units (OUT) were represented in fields that practiced conservation agriculture, with the most dominate arbuscular mycorrhizal species being Glomus macrocarpum and Rhizophagus proliferum  (Fig. 1b).