This article forms part of a series covering the experiences of FBIP-funded travel grant students at the 7th International Barcode of Life (iBOL) Conference.

Cape Town – A University of KwaZulu-Natal PhD student has returned from the 7th International Barcode of Life (iBOL) Conference with a renewed sense that her research is very important and contributes new knowledge.

Kerry Etsebeth, whose PhD research looks at the molecular systematics of Alcyonacea (soft corals) in South Africa, says that numerous topics at the conference had relevance to her work on corals.

“One of the things that really struck me was the lack of sequence information (and metadata) for marine taxa on BOLD [Barcode of Life Database] and that few barcoding projects tackled this group compared with terrestrial animals and plants,” she says.

Etsebeth received a student grant from the Foundational Biodiversity Information Programme (FBIP) to attend that conference which was held at the Kruger National Park (KNP) town of Skukuza. Over 460 participants from 71 nations descended on the KNP for four days of conference proceedings. 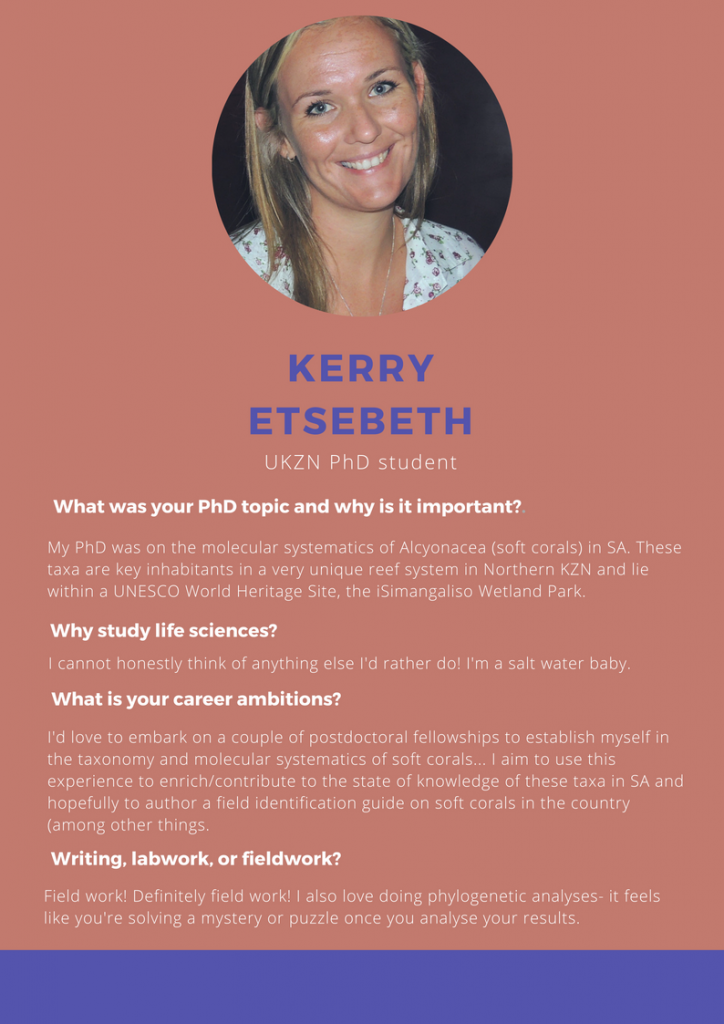 Of relevance to Etsebeth’s current research is the fact that DNA barcoding is difficult in “non-model organisms” for which there are no pipelines available and for which new methods are needed. Barcodes also don’t address “hybridization”.

“We need new methods for many marine taxa that exhibit a more complicated evolutionary history with a lack of genetic and morphological congruence,” she says.

One of the presenters, Jessica Hellman, had several interesting points which pertained to Etsebeth’s work – one of the principles of conservation and biodiversity is that we need to conserve at the population (genetic diversity) level and not the biodiversity (species) level.

Etsebeth said she had met many researchers who experience the same challenges with their taxa and had interesting and helpful discussions on the issues they face in their research. “There’s no doubt that this networking is already leading to collaboration!”

‘Your success is only as strong as your database’

According to Etsebeth the week was “jam-packed”. She attended two workshops namely ‘Introduction to DNA barcoding’ and ‘DNA metabarcoding’.

The Introduction to DNA barcoding workshop introduced new technology making its debut in the field: ‘in-field scanner technology’ which brings the lab to the field for quick identification, especially in wildlife forensics.

Says Etsebeth: “We were introduced to 2nd generation and 3rd generation DNA sequencing techniques and sequence analysis of the output data. An important point of consideration when using these techniques was that “your success is only as strong as your database””.

A few plenary talks really stood out for Etsebeth including some of the presentations.