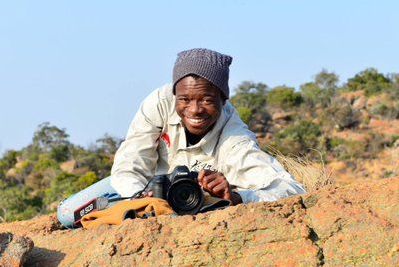 Cape Town – An FBIP-funded postgraduate student, Fortunate Phaka, has been named among News24’s 100 Young Mandelas under the category, ‘vision’.

According to the feature article published on News24 Phaka, 32, is an environmental scientist and author of a book titled ‘A bilingual field guide to the frogs of Zululand’.

Phaka chose to focus his studies on South African wildlife and its interactions with the country’s cultures and languages, which he feels have been marginalised from environmental research.

“In his research studies Fortunate investigated the complicated relationship between cultural and biological diversity with the aim of increasing social inclusion in environmental matters and informing environmental policy that is socially and ecologically justified.

The motivation behind his study route is based on Fortunate’s inherent belief that current environmental policies exclude certain people, their cultures as well as certain animal groups.

As a way to remedy this, he wrote the frog guide in both English and isiZulu. He also started compiling a comprehensive list indigenous names for South African frogs and reptiles. He has published guidelines for doing this in a scientific journal so that anyone wanting to contribute to the list of indigenous animal names can freely add their own or use the ones he has found.

Fortunate’s initiatives not only contribute to the development of previously neglected languages, but they also add scientific merit to cultural knowledge. He is currently studying a joint PhD between South Africa’s North-West University and Belgium’s University of Hasselt,” the article said.

The FBIP caught up with Phaka to gather some insights from the young trailblazer:

FBIP: What does being named as one of 100 Young Mandelas mean to you?

Phaka: Any major recognition for my research feels like someone is saying to me; “keep going, you’re doing something right”. Being one of the 100 Young Mandelas for the future feels surreal because it means my work embodies the values held by one of the greatest and most influential people in this world.

FBIP: What advice do you have for other students following in your footsteps?

Phaka: Differential advantage is one of your best chances of success in this world since there will only ever be one version of you. Be brutally honest with yourself so that you can work on your weaknesses and constantly improve yourself. Stay true to who you are and what you stand for, the world will always try to change you but will never accept you.

FBIP: And finally, what does it take to be a visionary?

Phaka: I didn’t consider myself a visionary until I was announced as one of the 100 Young Mandelas. I think being a visionary means being forward-thinking, innovative, and believing that the most effective solutions can be found through combining knowledge from different fields of study. It means when faced with problems you combine knowledge from fields that have traditionally been separate so that you have a solution that aims to satisfy everyone that is affected by the same problem but in different ways.