MSc Focus: Toka wanted to be a doctor but his passion led to zoology 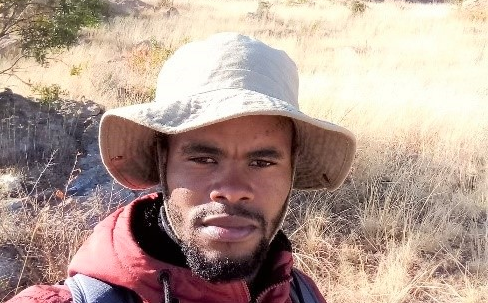 Initially Mosikidi Toka initially wanted to be a medical doctor.

However, as with many other first-generation students, he did not have enough information on his desired studies.

So, he registered for a Bachelor of Science (BSc) in Zoology and Life Sciences at the University of the Free State.

He hoped to join the medical school afterwards, in his third year. However, he could not make the move due to the strong love and passion he had developed for (pure) science.

Consequently from his third year as an undergraduate student, he started loving nature and developing a curious mindset. Above all about how animals respond to certain external stimuli. This was when he realized the need to further his studies in science, particularly life sciences.

Mosikidi is 26 years old and reigns from QwaQwa, a rural town located in the eastern Free State and this is a short sketch of his academic journey.

Since his decision to pursue his interests in natural science he has been exploring every avenue in zoology to broaden his understanding of the field.

Consequently he describes his love for zoology as “optimal”. This was until he was introduced to animal behavior through the Mammal Cognition Lab during his BSc Honours degree with Prof le Roux.

Since then, he describes himself as the happiest scientist.

Mosikidi loves working in the wild and living on the edge, and his current studies give him that satisfaction.

Despite finding himself in a good scientific space, he says challenges have always been there. For example, one of the biggest challenges was to settle in at the university.

His first year at the university was the most challenging because he could not use a computer.

“It was my first time using a computer. Most lecturers wanted their work typed. However, I got better with time until I overcame that challenge. Apart from technical challenges, my course has always been a challenge on its own.

“I was never a good student. For instance, I used to fail class tests and semester tests until my third year when I found my purpose. I became the Dux award recipient that year. Presenting at an international conference was one of the biggest challenges I have ever encountered in this field,” he says.

He attended the Animal Behavior Society Conference in 2020. So, before his presentation, he decided to check the attendee’s profiles. “I almost fainted when I saw those profiles,” he recalls his memory of the high profile event.

With a good dose of humour, he says he is slowly becoming better at presenting now that he does not check attendee’s profiles anymore.

One challenge that he still cannot overcome is the perception among his family and friends towards his study field. “For some reason, they think it’s a waste of time due to scarcity of permanent jobs and white dominance in the field,” he says.

Yet, he is hopeful that they will understand his reasons with time.

As for his current study, workload and data analysis are the most challenging parts. There are no shortcuts due to his high expectations and hardworking supervision team.

He does his best to learn everyday as he uses technology that no one else in his department is familiar with.

Mosikidi’s current study is based at the Golden Gate Highlands National Park (GGHNP) wetland, in the high lying grassland biome. He is in the process of documenting the bird diversity and vocal activity patterns of bird species in the wetland.

He is also trying to determine the wetland health status using bird diversity as a measure. The study also promotes the use of less invasive techniques such as “passive acoustic monitoring” in contrast with traditional methods.

“We developed this study in response to the South African National Biodiversity Assessment, which indicated the urgent need to document and investigate the health of our wetland systems due to the high wetland and estuary degradation rate in South Africa.

“This study will provide an updated wetland bird inventory list of the GGHNP, which will advise on the monitoring and conservation priority areas for the park. It will give the wetland health status of the GGHNP wetland, which will help the National Biodiversity Assessment (NBA) of South Africa.

“As one of the chapters looks at the effects of weather on the dawn chorus onset of some species, this will help researchers determine the best or suitable sampling periods for the concerned species.”

Mosikidi says his biggest win would be to become one of the best lecturers in animal behavior. He would also like to grow in academia, and become a well-established researcher in one of the best institutions abroad.

“After finishing my Master’s degree, I will be enrolling in the PhD programme in behavioral studies and hopefully finish with the same energy I currently have.

“I have been exposed to some of the best mentors in this field and have also been exposed to many postgraduates suffering from mental issues due to lousy supervision, so I want to share my knowledge, assist, support, and guide postgraduate students,” he says.

Furthermore, he says his dream of becoming one of the best teachers is not entirely based on his academic background.

“It incorporates my interpersonal skills as well as my ability to embrace and appreciate diversity.”