Budget 2020: All you need to know about Mboweni’s ‘Totem Plant’ 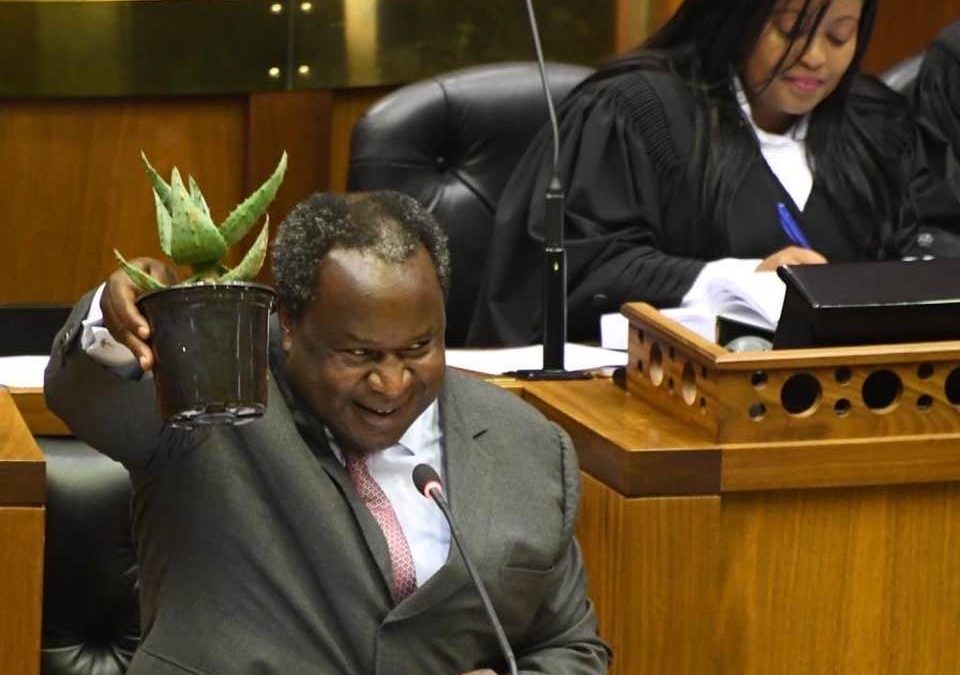 Cape Town – In February the President’s SONA speech was dominated by the SA economic crisis, leaving little room for addressing biodiversity, two weeks later the same happened in the Finance Minister’s Budget 2020 – only this time a ‘totem plant’ gave us hope.

While Finance Minister Tito Mboweni’s budget did not make any special allocations to biodiversity – which is arguably facing the biggest crisis in the planet’s history – he did use one of South Africa’s iconic indigenous plants as the philosophical framework for his speech.

This is a historical step in framing South Africa’s economic narrative.

Concerning the latter, Canadian philosopher and media theorist Marshall McLuhan’s pithy quote is instructive: “The medium is the message”. Aloe ferox is the Budget message for 2020 – and Mboweni appeared to be invoking its “Kanniedood” (i.e. cannot die in Afrikaans) reputation. “Kanniedood” being one of the plant’s many common names.

“Madam Speaker, The Aloe Ferox [sic] survives and thrives when times are tough. It actually prefers less water. It wins even when it seems the odds are against it…

“…Our measures will support growth. But fiscal sustainability must be uppermost in our mind. Our Aloe Ferox [sic] can withstand the long dry season because it is unsentimental. It sheds dead weight, in order to direct increasingly scarce resources to what is young and vital…

“For a fast-growing economy we need to make sure our children are well educated, our people are healthy and our money is invested properly,” Mboweni said in his speech to parliament.

The United Nations General Assembly, the highest decision making organ of the body, has declared 2020 as the International Year of Plant Health (IYPH).

The 2020 declaration represents a once in a lifetime opportunity to raise global awareness on how protecting plant health can help end hunger, reduce poverty, protect the environment, and boost economic development – so Mboweni’s Budget 2020 allegory appears to be on point.

Aloe ferox (also known as the Cape aloe and Bitter aloe among others) is one of the best known South African plants with a long history of medicinal use, according to the South African National Biodiversity Institute (SANBI) plant database – PlantZAfrica.com

The name is derived from the Greek word for the dried juice of aloe leaves and ferox – “fierce” or “war-like”, refers to the spiny edged leaves. According to PlantZAfrica.com the bitter aloe is most famous for its medicinal qualities.

“In parts of South Africa, the bitter yellow juice found just below the skin has been harvested as a renewable resource for two hundred years,” the indigenous plant database says.

Interestingly Aloe ferox, along with Aloe broomii, is depicted in a rock painting which was painted over 250 years ago.

While Aloe vera is the big money spinner globally, commanding a market of R1.65 trillion (about a third of SA’s GDP), South Africa’s indigenous A. ferox industry is relatively small with a retail value of R60 million. The plant grows naturally from Swellendam in the west to southern KwaZulu-Natal in the east.

The traditional harvesting area is the Albertinia-Mossel Bay region but there are also some commercial operations in the Eastern Cape – a few businesses have now planted plantations of Aloe ferox.

According to Matchdeck about 300 tons of aloe bitters (the crystals) are harvested each year in South Africa. A far larger volume of leaves are processed for the inner, non-bitter gel that has become the main product, used to make aloe health drinks. Most of the crystals are exported but most of gel is used locally.

Aloe lump (the bitters) is used as a purgative medicine but is also used as a food ingredient – in bitter tonics etc. The gel is used in beauty products and in health drinks.

“South Africa’s biggest export markets are Germany, Italy and Japan,” Professor Ben-Erik van Wyk from the University of Johannesburg, and head of the Aloe Council of South Africa told Matchdeck in 2013

“The industry has a long history in South Africa and the bitters has been an export product since the 1760’s. There is a still a steady demand for the bitters.

The gel drinks have better prospects in the local market but imported aloe drinks (Aloe vera based) are giving stiff completion,” he said.

In 2019 South Africa – through its Department of Environmental Affairs (DEA) – made a submission to the Convention on International Trade in Endangered Species of Wild Fauna and Flora (Cites) at its COP18 meeting in Sri Lanka.

DEA said tourists were faced with “challenges” when they bought aloe-based finished products in the country and were unable to take them home immediately.

“Several resource assessments of Aloe ferox and a biodiversity management plan is being developed,” DEA spokesperson Albi Modise told IOL News of the proposal to exclude finished products of Aloe ferox, listed on Appendix II, from regulation under Cites.

“Appendix II includes species not necessarily threatened with extinction, but in which trade must be controlled in order to avoid utilization incompatible with their survival,” according to Cites.

Modise said it was anticipated that the amended annotation would still allow regulation of trade from wild populations but would facilitate the in-country processing of both primary and secondary extracts from A. ferox leaves.

“This should promote the sustainable and efficient use of wild harvested aloe resources. At the same time benefits to community livelihoods and local economies will be enhanced, and the regulatory burden on both importers and exporters will be reduced,” he said.

The Redlist of South African Plants classified the A. ferox as Least Concern in 2012 with the justification that “Aloe ferox is widespread and common throughout its range. The leaves of this commercially important medicinal plant is extensively harvested and products derived from harvested material are exported”.

It went on to state that “large volumes have been exported since the 1980s, with an increase in trade over the past 15 years. Despite heavy exploitation in some areas this species is still extremely common and not suspected to be in any danger of extinction”.

After being invited to submit a mini review for the journal Phytochemistry Letters van Wyk and three research colleagues published a 2012 paper titled “Cape aloes – A review of the phytochemistry, pharmacology and
commercialisation of Aloe ferox“.

In the abstract the authors write “Aloe ferox is a polymorphic species indigenous to South Africa. The plant has been used since ancient times as a generic chemopreventive and anti-tumour remedy in folk medicine and it has a well-documented history of use as a laxative. In addition to the plethora of traditional medicinal uses, A. ferox has recently gained popularity as an ingredient in cosmetic formulations and food supplements”.

“Anti-oxidant, antimicrobial, anti-inflammatory, anticancer and antimalarial activities, etc. have been reported. In addition, the ability of Cape aloes to enhance the transport of poorly permeable drugs has enjoyed recent research interest…

“A summary of the historical and modern day uses, commercialisation, chemical composition and biological properties of this coveted ethnomedicinally and commercially important species is presented.”

Cape aloes – A review of the phytochemistry, pharmacology and commercialisation of Aloe ferox by Dane McDonald on Scribd