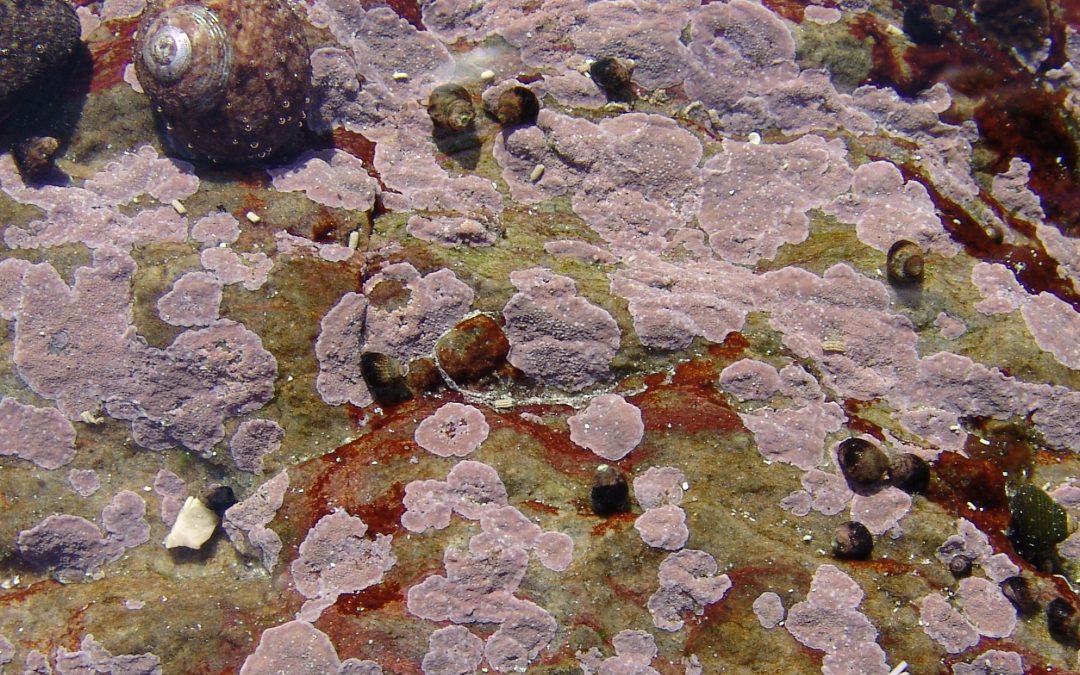 A fun scramble on any rocky intertidal shore will often draw attention to many, common and fascinating creatures like seastars, anemones, mussels and barnacles. However, it takes a special kind of ‘observer’ to zone in on crusty patches of paint-like seaweeds dotted all over the intertidal rocks.

University of the Western Cape (UWC) marine biologist Prof Gavin W. Maneveldt is one such observer – of crustose coralline red algae. Fierce battles, which will put any “Game of Thrones” episode to shame, are fought daily on and among these rocky fortresses between sea plants that resemble blotches of pink paint scattered as though a mad painter dripped them over the shore.

In an article originally written for Agri-Culture in 2015, Maneveldt described at least four types of ‘overgrowth competition’ in encrusting corallines, including a ‘competitive standoff’ where neither species wins at overgrowth competition. It is often said that one should retreat into nature to find peace. If corallines could speak they would probably scoff at these lofty human ideals.

Known simply as ‘Gavin’ to his colleagues and students, Prof Maneveldt (49) is a man of medium height with a slight stoop and a soft but assertive manner. He is also a self-confessed hoarder. Any visitor to his office at the Department of Biodiversity & Conservation Biology will fight for space amongst his countless sea shells, dried seastars, corals and other natural history trinkets – all keepsakes from nearly three decades of marine fieldwork.

In 2015 Maneveldt applied for funding from the Foundational Biodiversity Information Programme (FBIP) to investigate the taxonomy of the coralline algal genus Spongites. The application was successful and the findings would eventually contribute to the FBIP’s SeaKeys project a large collaboration that aims to collate and increase marine biodiversity information.

An interested and willing student, Courtney Puckree-Padua, took up the project as a PhD registered student. Gavin and Courtney informed the scientific community of the initiation of the project on ResearchGate, a social network for researchers. The project lives on ResearchGate under the title “Re-assessment of the non-geniculate coralline algae of South Africa”. Twenty-two international researchers are currently following the project including scientists from countries that include Cuba, Nigeria and Germany.

Nature appears to have played a magic trick on the coralline taxonomy community over time. We were convinced that one ecologically important temperate species, Spongites yendoi, was globally widely distributed (first described in Japan) occurring regionally from Mozambique all along the SA coast around to Namibia in the Atlantic Ocean. But, in the same way as a magician often flicks their thumb and index finger to reveal a fan of cards, so too nature has revealed a fan of several, possibly as many as eight, distinct species posing under that name in South Africa alone.

The coralline algal team used ‘modern molecular techniques’ to sequence the organism’s DNA and make the finding. “Molecular data has demonstrated that this entity we have been calling Spongites yendoi, is in fact seven or eight different cryptic species,” a visibly excited Maneveldt said.

The finding highlights a common theme in the field of taxonomy where the power of genetic analysis is expanding our knowledge of diversity to a degree that was not possible through solely ‘morphology and anatomy only’ studies in the past. However, this does not mean that taxonomists like Maneveldt are discarding histological techniques that examine the morphology and anatomy.

If anything, the DNA sequencing has illuminated much of the distributional, morphological and anatomical differences observed in these so-called ‘cryptic species’.

Maneveldt’s group now uses an integrated taxonomic approach that utilises DNA sequencing of field-collected specimens and, most importantly, DNA sequencing of type specimens, along with traditional morphological and anatomical characters to differentiate between specimens.

For example, the newly described coralline Spongites agulhensis is distinguished from S. yendoi by only two anatomical characters, one feature related to the construction of the algal ‘thallus’ or plant body, and the other related to the whether the ‘conceptacles’, which are cavities that house the reproductive organs, are buried or shed.

Puckree-Padua’s doctoral work has thus far contributed to four out of the 2400 FBIP-initiated species pages, and her preliminary findings reveal startling levels of cryptic diversity in an understudied group of organisms.

One of the main goals of the FBIP project is to generate “appropriate biodiversity information”. At the annual FBIP Forum in August 2017 the project lead Prof Michelle Hamer (SANBI) told the biodiversity data fraternity that “the FBIP tries to align data needs and [data], which is generated with national priorities and strategies”.

Ecologically, coralline algae are extremely important, particularly on coral reefs, says Maneveldt. “On these tropical reefs, the cementing of the reefs are actually carried out by coralline algae.” “A host of marine organisms feed on corallines as their primary food source.” “Due to their alkaline nature, corallines play an important role in mitigating ocean acidification.” They are reported to be some of the largest sources of carbon in the biosphere and as a consequence are extremely important in keeping our oceans in a healthy alkaline pH range.

Coralline algae have been used as building material in many coastal environments due to their hard, dense ‘calcified structure’. Places like Venice in Italy and Stone Town in Zanzibar have coralline algae to thank for many of their iconic buildings.

The cattle farming industry has also latched on to using corallines as an ‘antacid’ to reduce bloating and methane production in livestock – a boon for the fight against global warming, which is partly driven by cattle ‘farts’ on a gigantic scale.

Maneveldt’s findings suggest that South Africa is likely one of the richest locations in the world when it comes to coralline diversity.

“We suspect that if this is the kind of finding we are seeing for Spongites as a genus, knowing that we have other genera in South Africa, we’ve probably underestimated the coralline taxa, not only for SA but for the world, by as much as 2-4 times what we currently know based solely on morphology and anatomy,” he said.

In the meantime, while Maneveldt’s team untangles coralline taxonomy, vigorous battles for space and resources are taking place on the rocky shores of South Africa between multitudes of coralline species currently still undescribed.