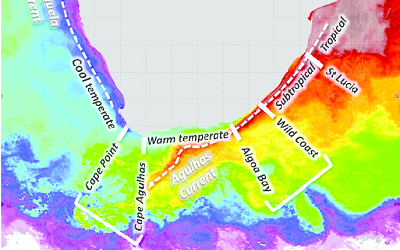 There are countless ways to describe planet earth. One could describe it in relation to other planetary objects like the moon in the branch of science called astronomy. We could also describe it in terms of its smallest components, called ‘quarks’ by physicists.

However, should one decide to describe the earth in relation to the variety of life and living systems that exists thereupon, you would find yourself immersed in a branch of biological science called ‘biodiversity sciences’. And if you go step further using the genetic blueprint (DNA) of organisms to tell the story of a particular species in relation to the earth’s history, you would have settled in a field called ‘phylogeography’.

One marine phylogeography researcher, Prof Sophie von der Heyden from the Evolutionary Genomics Group at Stellenbosch University, has focused her lab’s attention on what is referred to by the South African marine community as a ‘natural laboratory’.

Much, if not all of the Von der Heyden Lab’s research is 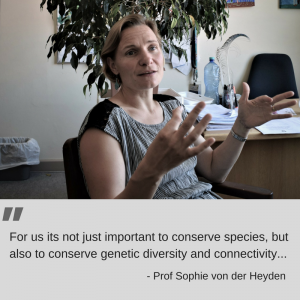 somehow affected by the confluence of the warm Indian and cold Atlantic Ocean basins, each with their Agulhas and Benguela currents respectively. Like the opposing cogs of an old clock, the system has established itself as a powerful driver of South African marine community structure and biodiversity patterns over geological time.

In 2013 Von der Heyden’s research was provided with funding from the Foundational Biodiversity Information Programme’s (FBIP) Seakeys project to investigate two aspects of the aforementioned marine system. The first set out to investigate the population structure of commercially exploited Kingklip while the second aimed to shed light on the phylogenetic distribution of two crinoid (feather star) species.

What follows is a two-part story on the power of molecular tools to not only uncover marine biodiversity but also to inform the management of South African marine resources…follow links below.