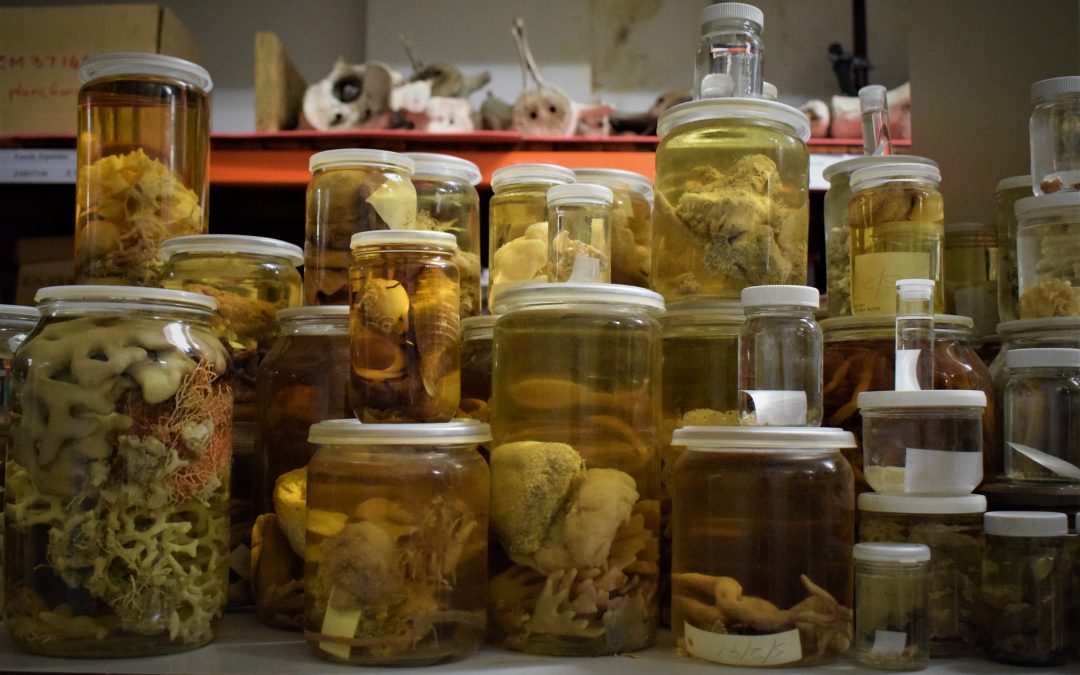 As with most of the approximately 55 000 museums across the world, Iziko Museums of South Africa in Cape Town is the epitome of structure and organisation. Its displays are neat and orderly and the exhibition halls are characteristically dim, as its mounted specimens bear testimony to organisms and environments long departed.

If ever there was a façade…

After a brisk three minute walk through the exhibition halls, and with a hard hat on your head, you enter a biometrically controlled access door, which ushers you into a different world. Here the ‘hush hush’ of museum galleries feel like a distant memory. Museum scientists, technicians and students are actively busy behind computers, microscopes, and specimens.

But what kind of alternate museum reality requires a hard hat? You might ask. If you are being escorted by the Curator of Marine Invertebrates, Dr Wayne Florence, you would likely be told that “you are entering an active construction site”.

In 2011 Iziko Museums embarked on an ambitious construction project – the Courtyard Project – which sees the construction of five storeys within the courtyard of the Museum; housing collections, offices, and laboratories.

It is in this ‘back-end’ of the museum where Florence and his team made no small contribution to the Foundational Biodiversity and Information Programme’s SeaKeys project.

Florence gave the FBIP communications team access to the museum’s Basement Store; known as the ‘bowels’ of the museum by staffers. While state-of-the-art extractors and de-humidifiers work tirelessly, one is immediately confronted by a strong but not overwhelming whiff of preservative; used widely for long term storage of biological specimens.

According to Florence the bulk of his team’s contribution toward the SeaKeys project took place on the bottom floor basement area. “With the SeaKeys project we’ve managed to curate a number of backlog specimens in the museum,” said Florence alongside a table fully packed with specimen jars of different sizes.

Florence describes the marine invertebrate collection as a ‘physical database’ of information about species. “They are the ultimate gold standard of where a species occurs in space and time,” he says.

Ordinarily specimens in the collection will have a label showing a range of ‘metadata’ including locality information (i.e. where it was collected), depth, date, georeferenced coordinates, preservative, and who the collector was.

According to Florence this information is very important because it provides researchers with ‘a dot on a map in space and time for a particular species’. For the entire collection this information is somewhere in the region of 60-100 000 ‘dots’ on a map for species; useful information for looking at aspects like change in species distribution over time, spatial information about where species occur, biodiversity hotspots, and more.

“It gives you all those specimen species occurrence data through space and time for application and uptake for societal benefit,” says Florence.

From Dust to Data…

The museum collection dates back almost 200 years to 1825 when the institution had its roots as a public museum, based in Cape Town’s Company Gardens, which exhibited zoological specimens and augmented the menagerie of live animals, established by the Governor of the Cape.

Subsequently the collections have grown to almost 4 million specimens; much of which are very old, undocumented, unidentified, and some even lack the aforementioned ‘metadata’. It is estimated that almost half of the collection remains in this un-curated state, hampering dissemination of a more complete dataset for uptake by applied research and decision making.

Florence, says for example, that some of the undocumented ‘habitat-forming’ specimens are important for providing functional information about ecosystems; something essential to decision making about conservation of biodiversity.

Through the SeaKeys project, Florence said, his team had enough ‘hands’ to work through the backlog. The team comprised contract digitisers, interns, museum technicians, collections managers and expert taxonomists for each respective taxonomic group.

Taxonomy for the uninitiated, is “the branch of science which deals with classifying, identifying, and describing species,” says Florence who is a bryozoan (moss animal) taxonomist for the better part of 17 years. And while it sounds like a simple playing field, Florence says that taxonomy is globally considered to be a “specialised and scarce expertise”.

Florence, who played the role as co-investigator for the SeaKeys project, pulled together top taxonomic experts in the business to identify the specimens including, Mr Dylan Clarke for polychaetes, Prof Mark Gibbons for hydroids (closely related to jellyfish), Dr Toufiek Samaai for the Porifera (sea sponges), and himself for bryozoans (sea mosses) to name a few. Ms Zoleka Philander of DEA provided much expertise and Professor Charles Griffiths and his team of taxonomy students worked on an array of marine invertebrate taxa; most notably the Echinodermata.

Florence recounts that a common problem at the museum in the past and to a certain extent at present is that scientists would say to a collections manager “I need a list of this particular species as a matter of urgency…” What happens next can best be described as a nightmare for the unfortunate collections manager who has to find (in some cases) 8000 records of a particular species in a book that makes J.K. Rowling’s Harry Potter look like a pamphlet.

“So having the information in digital format means that you don’t have that problem anymore,” says Florence.

The collections manager for fish, Albé Bosman, led the digitisation effort which takes the process from a specimen with all its newly attached metadata to a database for dissemination to various stakeholders including scientific researchers and decision makers.

SPECIFY (v6) is the collections management software of choice for Iziko and as Albé puts it our ‘all-in-one stop shop’ for among other tasks managing data, collections, and specimen loans. Bosman says three things need to happen to the data before the ‘SPECIFY-ed’ box can be ticked.

“We do a taxonomic check and update where necessary, we fix keystroking (typing) errors, and thereafter it gets georeferenced – essentially it gets a dot on the map, which can be visualised through various GIS programmes and Google Earth,” says Bosman.

In the world of ‘data mobilisation’, unlocking almost 60 000 new records and curating thousands of ‘backlogged’ specimens is no small feat and requires innovative ways of managing a team around a task which could be laborious at times. And while the team did include a few special individuals who had that unique ability to ‘sit there all day long and outperform absolutely everybody else’, says Florence, it was useful to split up the week into various activities for variety.

“We would have little competitions where we would see who could digitise the most in a week, and then top performers would get some time off. We would also set targets and have celebrations when we attain certain targets,” says Florence, who is known to appreciate a cold beer and laugh after a job well done.

The team took the project further by developing several taxonomic checklists, which lists all the valid species of a particular taxon and is important for any ecological study or environmental assessment. Iziko curator of marine fish and polychaetes, Dylan Clarke, headed up the process.

The first step in the process, Clarke said, is to collate all the known literature that records presence of a particular group of animals (e.g. Polychaetes) in South Africa. The scientific names are then extracted or digitised into a database. Hereafter, these species names are verified by expert taxonomists with the aid of the World Register of Marine Species (an online database of accepted names and synonymies for marine species.

Also known as ‘The Head’ by the team, Clarke developed checklists for the sea sponges, sea mosses, hydrozoans, and polychaetes thereby closing the loop in a process which was initiated in (2014) and will see the publication of the checklists in peer reviewed publications in the very near future.

With the SeaKeys project, the team at Iziko has once again shown that museums are more than just institutions for exhibition and display of ‘dead’ natural history collections, they are living institutions which form the backbone of many scientific endeavours.