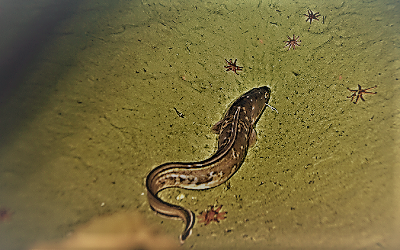 Genypterus capensis, commonly known as Kingklip, is one of South Africa’s most valuable marine resources. At present the fish, which belongs to the cusk-eel family, is caught as a by-catch of the Cape hake trawling and longline fisheries. In economic and perhaps culinary terms; if Hake was silver, Kingklip would be gold. It lives close to the seafloor off both the west and east coasts of South Africa.

Should we purchase Kingklip at the fish market we probably would not know whether it came from the west or east coast, because morphologically they look the same. And why should we care anyway?

According to Prof Sophie Von der Heyden from the Department of Evolutionary Genomics at Stellenbosch University understanding the population structure of Kingklip is important if it is to be managed sustainably for sustenance and economic benefit.

“The question of whether it is a single stock or two different stocks is important because that ultimately determines what kind of fishing pressure one can allow,” she said, adding that the east coast stock is much smaller than the west coast stock.

In addition, a stock with low genetic diversity is more vulnerable to environmental changes like climate change and over exploitation in the same way that an investor is more at risk of losing all their money by not investing in a diverse portfolio. 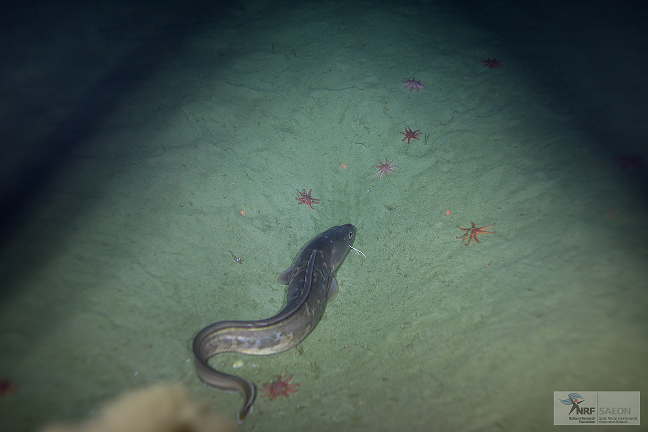 At the same time the isolation of a gene region allows for comparing the genetic equivalent of ‘apples with apples’. This is achieved by taking a statistically sufficient amount of samples from Kingklip fishing grounds and using a sophisticated laboratory technique called the ‘Polymerase Chain Reaction (PCR)’.

The PCR technique is analogous to photocopying a page. For example, if a book represents all the genetic material of an organism and a particular page could be a genetic portion (fragment) of interest, a primer “marks” the specific fragment like a bookmark and allows an enzyme, called a polymerase, to act as a copy machine to produce copies of the DNA fragment. The addition of ‘bases’ that make up DNA, called nucleotides, act as paper and ink. Thus, PCR enables researchers to produce several million copies of a particular sequence in a matter of hours.

In Von der Heyden’s project, the resulting gene sequences were then analysed to draw conclusions about the Kingklip population structure. The findings, published in the Journal Fisheries Research, are remarkable in the picture they paint of the past and current status of the species and are a telling example of the power of phylogeography in explaining natural phenomena.

The findings suggest that overfishing might have influenced the recent demographic history of South African Kingklip, and that only a fraction of the population is actively contributing to the next generation.

Commercial fishing for kingklip commenced in the early 1930s and had intensified in the mid-80s to the extent that catches dropped 50% within four years (50 000 -25 000 tonnes), signalling severe population declines. The species was considered overexploited. The closure of longline fishing of the species in 1990 resulted in a small increase in abundance, but catches remain low.

The assessment of ‘population sub-structuring’ for South African Kingklip suggest the presence of at least two populations: one off the West coast and another off the East coast. According to Von der Heyden the break between the populations is most likely due to oceanographic factors – including the interplay between Benguela (West coast) and Agulhas (East coast) currents.

“However, there is gene flow between the populations, which means that this divergence is driven (as for many marine species), by a soft, rather than hard, barrier. So, there is a signal of two populations, that are able to move across this particular oceanographic barrier,” says Von der Heyden.

Furthermore abundance levels for both stocks appear to have improved in the last 20 years with the implementation of stronger regulatory policies regarding direct fisheries and total catches. In order to maintain this upward trend and ensure the maintenance of Kingklip’s genetic diversity in a long-term perspective, it is fundamental that catches remain low.

The authors recommend that further molecular surveys are conducted covering the entire distribution of the species and using a larger number of markers, such as whole-genome approach, to better understand both the natural and human impacts shaping the evolutionary history of Kingklip. 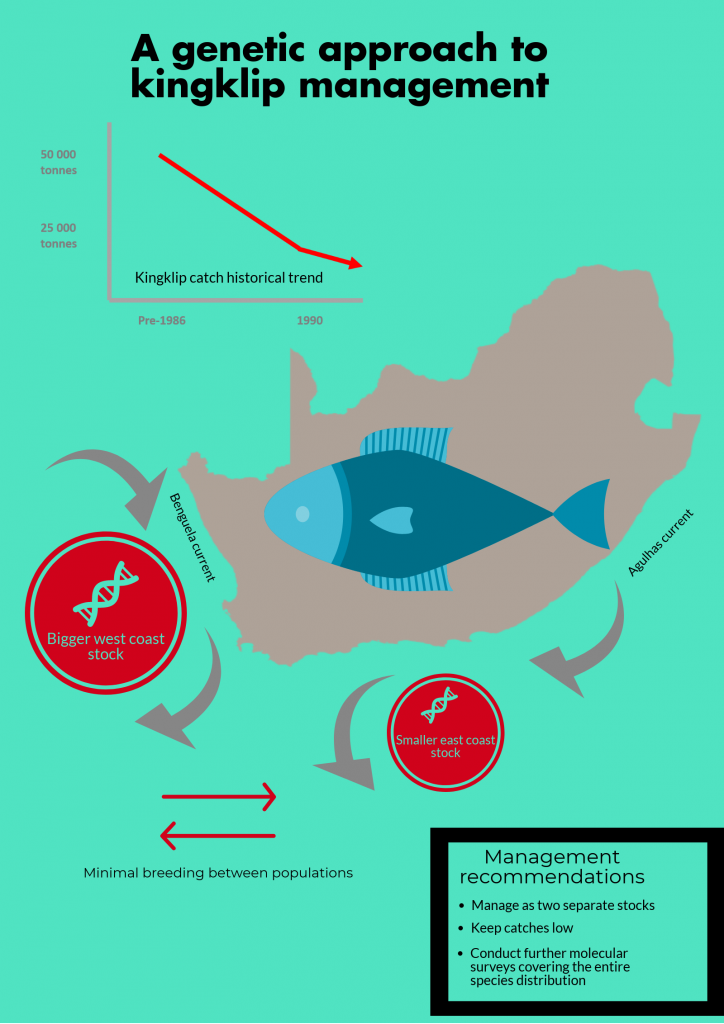