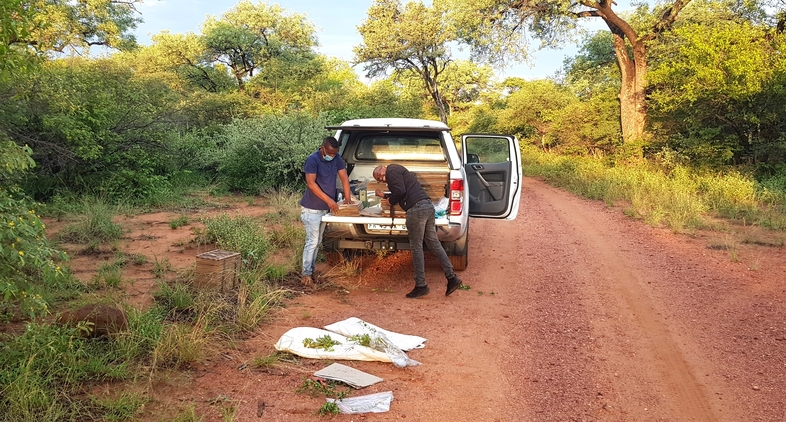 Adapted from an article by Pieter Bester

The South African National Biodiversity Institute (SANBI) National Herbarium – Pretoria – is a collaborator on the Waterberg Biodiversity Project and during mid-December 2021, a team kick-started fieldwork by visiting the D’Nyala Nature Reserve in the northwestern corner of the Waterberg, close to the town of Lephalale in Limpopo Province.

The team made 540 collections of fertile plant specimens, including 118 samples for DNA extraction. Of each collection, at least three duplicates were collected to be distributed to the Larry Leach Herbarium at the University of Limpopo and the H.G.W.J. Schweickerdt Herbarium at the University of Pretoria. Additional collections will be distributed through SANBI’s exchange programme to international herbaria.

Highlights of the trip included finding the Waterberg endemic Hibiscus waterbergensis (Figure 1), a Marsilea sp. (Figure 2) and various Adansonia digitata trees (above). A number of Grewia spp. (Figure 4 and 5) were in full flower, colouring the bushes in bright yellow. Most Pterocarpus rotundifolia trees were bursting with buds which opened to striking, sweet-scented, yellow displays on the day of our departure. En route from Lephalale to Vaalwater, the team also found the magnificent Clematis villosa (Figure 6) with flowers almost 100 mm in diameter.

“During the short field trip we were able to work every day despite the heavy rains which luckily mostly fell at night,” said Bester.

The area had received good rainfall, resulting in lush vegetation and an abundance of flowering material. Sampling was carried out in four vegetation types spread over four quarter degree grid squares.

The majority of specimens are still awaiting identification by staff at the herbarium, which may reveal some other interesting finds. This project will be carried out in three years and different teams from Pretoria herbarium will explore numerous areas. At least six collection trips will be undertaken annually.

The Waterberg Biodiversity Project is a multi-disciplinary and multi-organisational project funded by the National Research Foundation through the Foundational Biodiversity Information Programme.

The aim of this project is not only to collect foundational biodiversity information prevalent in this area (small mammals, birds, reptiles, amphibians, plants, aquatic organisms and invertebrates), but also to conduct climate and remote sensing, deoxyribonucleic acid (DNA) barcoding, phylogeography and community engagement.