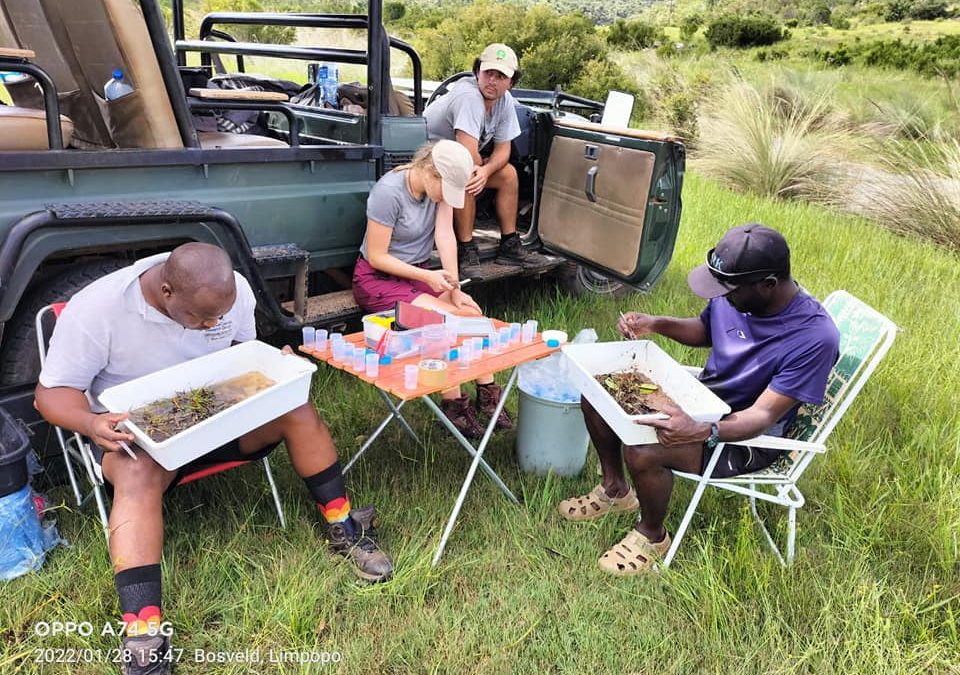 The Foundational Biodiversity Information Programme’s (FBIP’s) sixth Large Grant project focusing on the Waterberg region in Limpopo Province is in full swing as several taxon teams started combing the region’s landscape for scores of specimens that will put the ‘Foundational’ into the FBIP.

In early November 2021, the freshwater team led by Dr Albert Chakona from the South African Institute for Aquatic Biodiversity and Dr Darragh Woodford from the University of the Witwatersrand turned up new records for an electric fish, the Southern Churchhill (Petrocephalus wesselsi) and the Snake Catfish (Clarias theodorae) in the Welgevonden tributaries of the Mokolo River. New records provide important information in the quest to estimate the distribution range of a species and often lead to range extensions.

The duo also managed to capture and record 18 native freshwater species. The team conducted preliminary surveys of the freshwater fish diversity of the main rivers draining the Waterberg escarpment inside the Welgevonden Game Reserve including the Sterkstroom, Grootfonteinspruit, and Taaibos rivers.

In late January 2022, the aquatic invertebrate team started working through their chosen sampling areas and captured images of the most amazing invertebrates the programme has seen in a long time. The team commented that ‘when sampling river systems, you get to identify these invertebrates in their larval form – the occurrence of specific groups are indicative of good or poor water quality.’ Many of the specimens will be sent for deoxyribonucleic acid (DNA) analysis to confirm species identity and potentially reveal hidden diversity through cryptic or new species.

During mid-February, the terrestrial invertebrate team consisting of Dr Tharina Bird who is the entomology curator at the Ditsong Museum and Prof. Lorenzo Prendini, Arachnida & Myriapoda curator at the American Museum of Natural History, arrived at the Waterberg sampling area to focus on arachnids. The following day the team followed up on iNaturalist observations made by citizen scientists and had collected several interesting specimens that will be processed for DNA analysis.

Waterberg Project manager Marilize Greyling emphatically said ‘this sums up the importance of citizen science in the Waterberg Biodiversity Project,’ and she encouraged residents in the region to keep posting their observations on iNaturalist whilst adding that it makes a big difference to the project’s success and implementation.

Werner Conradie as the team lead from Bayworld, Dr Chad Keates from Rhodes University, Gary Nicolau also from Rhodes University and Courtney Hundermark from the University of South Africa spent a week conducting their preliminary herpetology surveys where they managed to collect a variety of stunning specimens including lizards, snakes, and frogs. They will return to the Waterberg to conduct further sampling in the future.

The Waterberg Mountain Complex (WMC) in the Limpopo Province is currently the focus of a multidisciplinary foundational baseline biodiversity data-gathering project.

According to the University of Pretoria project leader Prof. Nigel Barker, the WMC is a region of special conservation concern, and despite being situated a mere two to three hours from Pretoria where there is a hub of plant and animal biodiversity scientists, there has never been a comprehensive and structured survey of the region.

According to Prof. Barker, the WMC was previously used as an agricultural area, however, there have been considerable changes in land use for conservation and eco-tourism activities. One-third of the region has been declared a UNESCO Waterberg Biosphere Reserve.

In addition, says Prof. Barker, the Marakele National Park is also situated in the WMC and is part of the Waterberg Biosphere Reserve, as are some of the Limpopo Department of Economic Development, Environment and Tourism’s nature reserves.

‘While enjoying some environmental protection, proposed coal mines and related infrastructure projects on the northern borders of this area represent a major potential environmental conflict, and will impact the ecological integrity of the WMC,’ he reports.

The FBIP is a long-term programme to generate, manage and disseminate foundational biodiversity information and knowledge to improve decision-making, service delivery and create new economic opportunities.

The FBIP is a joint initiative of the Department of Science and Innovation (DSI), the National Research Foundation (NRF) and the South African National Biodiversity Institute (SANBI). The DSI provides core funding as part of the Global Change allocation.

SANBI is responsible for managing the implementation of the Programme and the NRF manages the project proposal review and grants allocation process. A steering committee was established which provides the overall strategic direction for the Programme.