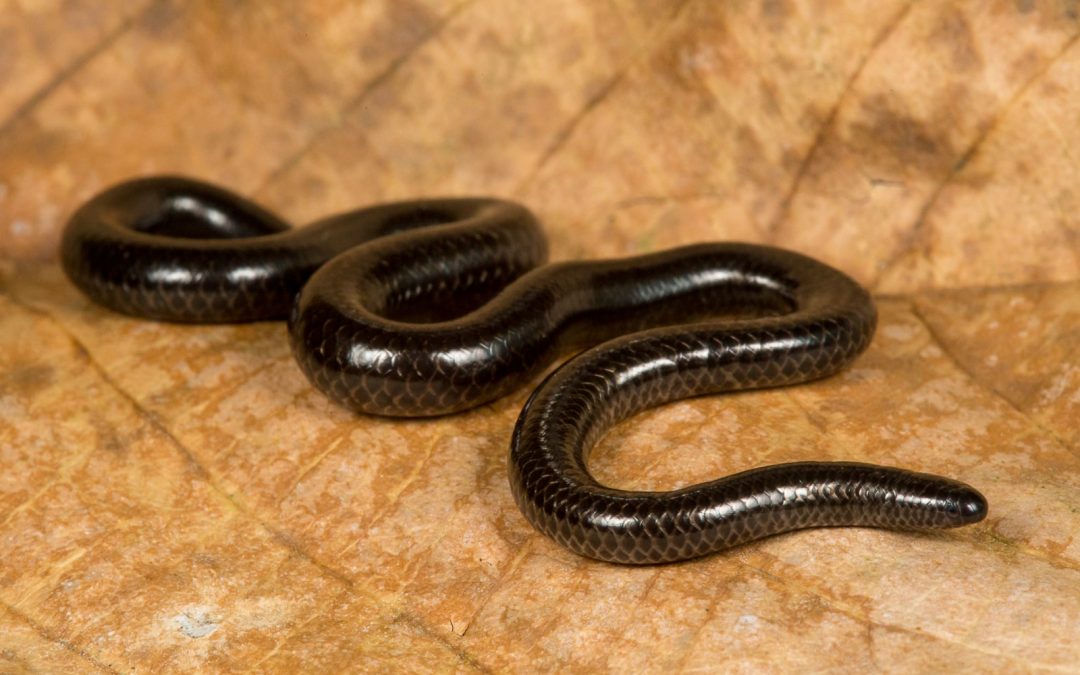 Cape Town – A small team of herpetologists have uncovered a treasure trove of snake biodiversity as part of the FBIP’s Eastern Cape Forests Project.

The findings were published in the Journal of Zoological Systematics and Evolutionary Research and forms part of a broader effort to document the diversity of South Africa’s Eastern Cape forests.

Lead author and MSc graduate Theo Busschau says the study propels biodiversity science forward in that the number of putative forest thread snake species has increased from two to ten, a fivefold increase in diversity.

The forest thread snake, scientifically known as Leptotyphlops sylvicolus, is the only described thread snake restricted to the forested regions of South Africa.

Unlike many other snakes L. sylvicolus does not have well developed eyes, spends most of its life underground, and is a very picky eater – feeding exclusively on ant and termite larvae.

In its bid to stay nourished on its very specific diet, evolution has seemingly blessed L. sylvicolus with an “invisible cloak”: studies have shown that the snake is able to produce a chemical which mimics its prey’s scent and allows it to enter ant nests and termite mounds without being attacked.

An earlier study by Adalsteinsson and others in 2009 showed that there were possibly two cryptic species. However, the sample sizes were low and further investigation was needed.

Busschau says their finding raises more questions than answers. He says the ‘species delimitation analyses’ of 10 cryptic species within L. sylvicolus is a conservative hypothesis, more species are likely. However, the species boundaries are not clear.

“There are varying degrees of morphological differences among these putative species, but more work remains before we can describe them,” he told the FBIP.

Busschau describes the snakes’ morphology as ‘conservative’, meaning that there are not much variation in the physical characteristics of the different snakes.

As such a lot more samples are needed to see what distinguishes one species from another and how they differ from known species.

Forests form the smallest biome in South Africa, yet they support a high proportion of the country’s biodiversity and are of high conservation value.

The study shows that forests possibly have much higher reptile diversity than currently recognised, emphasising the importance of forest conservation – especially since many of these cryptic species occur in small forest fragments.

“Additionally, the presence of multiple cryptic species with small distributions have implications for their conservation status once we describe them,” Busschau says, adding that L. sylvicolus is listed by the IUCN as ‘Least Concern’ at present.

Busschau alludes to a scenario where the description of multiple species means that each occupy a smaller area than the ‘umbrella species’ leading to higher conservation threat statuses (e.g. ‘Vulnerable’ or ‘Endangered’).

Busschau says this and similar studies are important because we need to know what is out there so we can conserve it.

“Unfortunately conservation management plans don’t often recognise genetic diversity, focusing only on the diversity of described species. Therefore future research is important to quantify the true diversity and describe the cryptic species in L. sylvicolus, so we can conserve them and the habitats in which they occur,” he says.

Although genetic diversity is often a neglected aspect of conservation, Busschau says it is important when species need to adapt to changing environments – L. sylvicolus likely shows patterns of genetic diversity that would be shared by other forest living species.

Therefore, future work is important not only for L. sylvicolus but also for other species that share its habitat.

FBIP data generated: the specimens collected during fieldwork have been stored in the Port Elizabeth Museum herpetology collection and all the sequence data is available on GenBank.

At the moment Busschau is busy with a follow up publication from his Master’s study where he includes five herpetofaunal species that are co-distributed in forests along the east coast, including L. sylvicolus.

“The aim is to statistically compare their phylogeographic patterns, divergence-times, and niche models to help us understand the factors driving diversity along the east coast, or rather the Greater Maputoland-Pondoland-Albany biodiversity hotspot,” he says.

“Once that is published I want to examine their morphology further and describe the species.”

Busschau received a bursary from the FBIP for his MSc and was subsequently awarded the Junior Captain Scott Memorial Medal for the best zoology or botany MSc thesis at a South African university by the South African Academy of Science and Art – he is currently enrolled for a PhD Biology course at New York University, based in Abu Dhabi.

He is “pretty sure” he will always be doing research in herpetology. “I’m passionate about my research and reptiles in general, though I’m not 100% sure about my PhD thesis yet, but I’m slowly putting together a project to investigate the evolution and adaptations of desert reptiles,” he says.