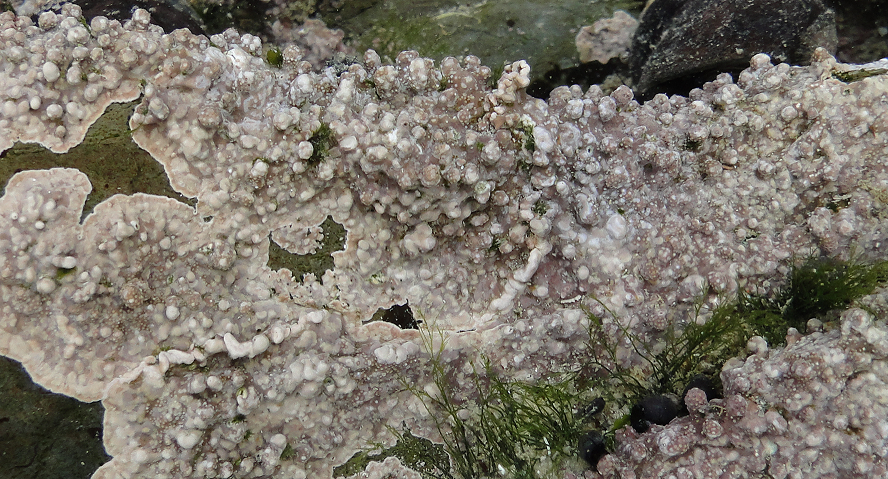 According to Prof Gavin W. Maneveldt from the Biodiversity and Conservation Biology Department at the University of the Western Cape (UWC) the description of South African species as Spongites yendoi in the past was based purely on morphological and anatomical features – if a specimen was found to be similar in morphology and anatomy (morpho-anatomy) to a published species (e.g. S. yendoi), then that specimen was listed as such.

For over 25 years, the scientific understanding was that S. yendoi occurred across ocean basins from Japan to southern Australia, to Indonesia, to southern Africa, and to the Pacific Mexico.

However, with the inclusion of molecular evidence (through DNA sequencing), taxonomists across the world quickly came to the realisation that several “cryptic or pseudocryptic” species existed.

A 2015 paper out of the Maneveldt laboratory was the first report ever for the non-geniculate coralline algae, where names had been unequivocally assigned (using DNA sequencing) that demonstrated that geographically overlapping (in close proximity to each other) species are genetically more similar than morpho-anatomical nearly indistinguishable species whose distributions are widely disjunct (e.g. Japan – South Africa).

“In other words, we showed that species were NOT generally widely distributed across ocean basins – this then sparked a series of investigations, and the genus Spongites was chosen as our starting point because it is the most ecologically important genus of non-geniculate coralline algae in South Africa,” Maneveldt says.

According to Maneveldt, taxonomists have highly underestimated the diversity of coralline algae, not just in South Africa, but also across the world.

Several species are cryptic/pseudocryptic and so morphology and anatomy can no longer be trusted for specimen identification.

DNA sequencing, which especially incorporates sequences from historical type specimens, is essential for unequivocal assigning of a specimen to a species name.

Species appear to be largely endemic to their coastlines and most species (especially temperate species) are not widely distributed across ocean basins.

The new species were described under the genus Chamberlainium and include C. capense, C. glebosum, and C. occidentale.

Thus far, none of the species previously reported from South Africa based on morpho-anatomy, and whose type localities are on other continents, is correctly applied in South Africa.

Maneveldt says this means that South African species are largely endemic and need to be the focus of conservation efforts. Some of the country’s coralline species are restricted to only about 10km of coastline, which makes understanding these algae particularly important.

“Threats to endemic species carry a great risk of extinction not only to the species themselves, but also to the myriad of ecosystem services that they provide,” Maneveldt said.

Posing as Spongites yendoi, these newly described species are the most prominent intertidal species along the entire South African coastline.

They serve as an essential food source for a host of intertidal molluscs (e.g. chitons and limpets), particularly in their juvenile stages.

Their interactions with the limpet Scutellastra cochlear mediates competitive interactions along our rocky shores and thus also determines relative cover abundances of these species.

They have a mechanism (epithallial and cortical shedding) for remaining free of fouling organisms; this then also regulates the diversity of epibionts associated with these species.

Many of these corallines produce a chemical cue that initiates the settlement of molluscs, which then also assist in keeping their surfaces free of fouling organisms.

Coralline algae (in general) also have a number of economic uses including medicinal use in the preparation of dental bone implants. Coralline rubble, known as “maerl”, is used in calcium mineral supplements, as soil pH conditioners, in the filtration of acidic drinking water, and as food additives (e.g. antacids) for livestock.

It has also come to light that coralline algae are possibly the largest source of carbon in the biosphere, suggesting that they may play an important role in carbon sequestration and mitigation of climate change.

The study is linked to the Foundational Biodiversity Information Programme’s (FBIP) SeaKeys project – a large collaboration that aims to collate and increase marine biodiversity information in service of society.