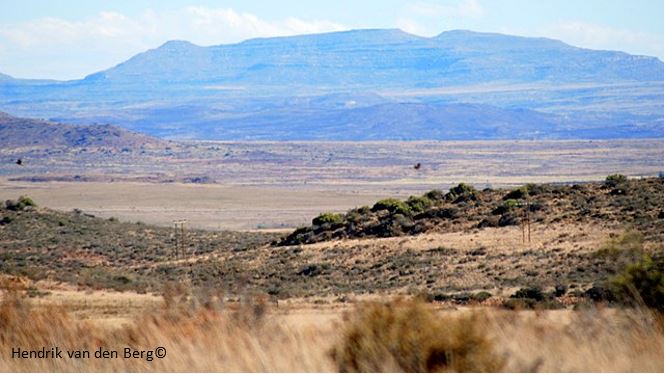 It is a very large mountain area of ~14 000km² of which the south-western parts have been tackled extensively by Prof Nigel Barker and his team from 2010 to 2016.

The team carried out the floristic survey and other work in the largely ‘under-collected’ or ‘underrepresented region’.

In a report to the FBIP Barker said Stormberg ‘material and records’ contributed to the discovery of a new species of Massonia and were included in the 2014 publication by Martinez-Azorin and others.

The rarely collected grass, Polevansia rigida, which was found to be abundant in vleis and pan margins in the central Stormberg. (Image: BOLD)

The Stormberg endemic Euryops calvescens – only known from three previous collections – was found to be locally abundant in the western Bamboesberge. (Image: Iziko)

Data and its mobilization

Collaborator on the Small Grant Project Dr Vincent Clark accumulated ~1219 botanical collections between 2011-2012. According to Barker the material has all been identified, labelled, and databased in BRAHMS.

“The BRAHMS data was updated as part of a FBIP data mobilisation project to create a virtual herbarium out of the southern Great Escarpment floristic data,” said Barker.

A total of 12 444 data records data have been produced as a result of this project. The data set is in the process of being verified by the FBIP.

A comparison analysis will be done to highlight threatened and sensitive species so that their GPS coordinates are withheld. The data set will then be published on Global Biodiversity Information Facility (GBIF) platform so that it is publicly accessible.

Barker told the FBIP that the data would also in future contribute to two papers in progress:

The data associated with this project is Open Acess and freely available – for more information contact the FBIP’s data specialist Mahlatse Kgatla (m.kgatla@sanbi.org.za)