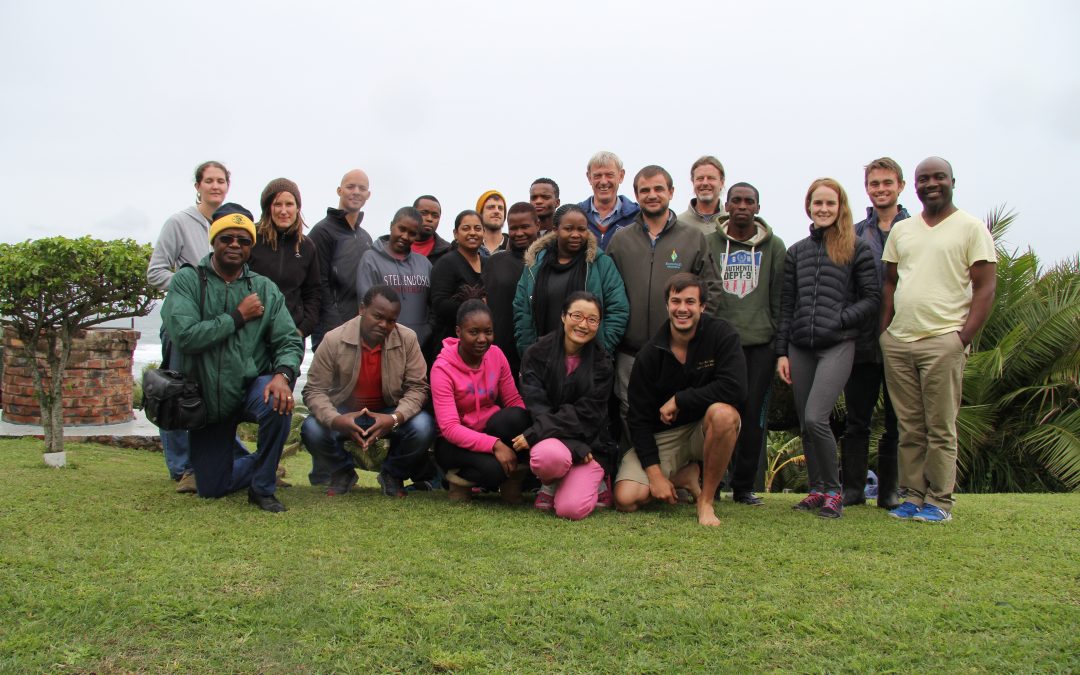 The FBIP funded Eastern Cape Forests Project has wrapped up with journal publications streaming in, data being processed, and several students graduating with honours, master’s, and doctoral degrees.

The Eastern Cape contains 46% of South Africa’s remaining natural forests, yet its animal diversity has been poorly documented. The importance of the region’s forest complement is further escalated by the fact that forests make up less than 1% of South Africa’s landscape.

The survival of our smallest biome is being threatened by two important factors, degradation and fragmentation, leading to range changes in forest dependent faunal species.

Through the Eastern Cape Forest Project, the FBIP is able to “generate, mobilise, co-ordinate and make accessible foundational biodiversity knowledge in line with the needs of society”.

Over the project period, a variety of organisms (with respective taxon specialists) including insects, invertebrates (crabs, velvet worms, molluscs and spiders), herpetofauna (frogs and snakes), birds, and mammals (rodents and bats) were studied.

Other collaborators were associated with Walther Sisulu and Rhodes universities in the Eastern Cape, the universities of Pretoria and Cape Town, and Harvard University in the United States. No fewer than six museums were involved, including four from the Eastern Cape (Amathole, Albany, Port Elizabeth and East London) plus Iziko South African Museum in Cape Town and the Durban Natural History Museum.

A critical aspect of the FBIP is increasing knowledge of the distribution of species. The project has resulted in more than 7000 specimen-based occurrence records (these will be available on GBIF), 994 of which have been sequenced and uploaded onto global public data repositories. Of these entries, approximately 640 have been made accessible through the Barcode of Life Data System (BOLD), with a further 231 (bird) barcodes currently being sequenced.

Specimens have been deposited in the Iziko, Port Elizabeth, Albany, East London and Durban Natural Science museums and in the National Collection of Insects, and avian records deposited at SAFRING and the Bird Atlas Project.

New species discovered include a land snail Chondrocyclus devilliersi from the Nqadu Forest by Dr Mary Cole; a freshwater crab Potamonautes mhlophe from the Pondoland Scarp Forest at Mbotyi by Prof Savel Daniels; four cryptic species of the gecko genus Afroedura by Theo Busschau; two land snails in the genus Gittenedouardia by Dr Evelyn Raphalo; and a velvetworm from Baziya Forest by Aaron Barnes. Range extensions were reported for six bat species.

The Programme supported studentships for four honour’s, two MSc and six PhD students, and provided running expenses for an additional five students (two MSc, two honours, and one PhD).  All students have graduated except for three PhD students expected to graduate this year.

The project has resulted in 18 peer-reviewed publications thus far.

Altogether 21 different forests were surveyed in the Eastern Cape, encompassing all seven of the region’s different forest types. Although the study was primarily a faunal survey, the team realized the necessity to provide an up-to-date assessment of informal harvesting of plant products, as it affects habitat quality.

Extraction rates and target species of key products, namely poles, timber and bark, were assessed across six forests, representing five forest types. Harvest intensities indicated low to moderate levels of use, but there was considerable variation in levels of resource use at the forest-scale, illustrating the importance of site-specific assessments.

Furthermore, resource use was species-specific, indicating that sustainability is dependent on the ecology of preferred species. Of concern was widespread commercial-scale bark harvesting; and relatively high timber extraction from a Pondoland Scarp forest, a threatened forest type.

The project leaders urge implementing existing regulations, which distinguish between subsistence and commercial use, and commensurate capacitation of the Department of Forestry, Fisheries and Environment (DFFE). In the case of timber and bark, licencing of the de facto commercial harvesting is recommended to promote regulation.

First of its kind study

The team decided to study functional diversity in two faunal groups in some detail: birds and bats. In birds, harvesting disturbances negatively affected some measures of functional diversity, while others were unaffected by harvesting. Bird traits relating to feeding ecology (i.e. primary diet and foraging strategy) were associated with habitat structure and harvest disturbances, indicating that harvest activities affected community structure.

These results suggest that current unregulated forest product harvesting in the Eastern Cape may negatively affect forest productivity and ecosystem functioning. Specifically, this is the first study to measure the effects of harvesting of poles and medicinal bark on the functional diversity of avian forest communities anywhere in the world.

For bats, the study is the first to show the pervasive role historical processes have had in structuring communities of the region. Scarp forests showed the highest species and functional richness, as they experienced less extreme climatic extinction filtering than Mistbelt forests during the Last Glacial Maximum; and thus harboured more specialized species.

Furthermore, the study demonstrated how forest edges positively affect bat functional diversity. Little is known of the sensitivity of bats to habitat fragmentation in Africa, but the study has shown that larger-sized insectivorous species; and species exhibiting low wing loading may be more vulnerable to fragmentation.