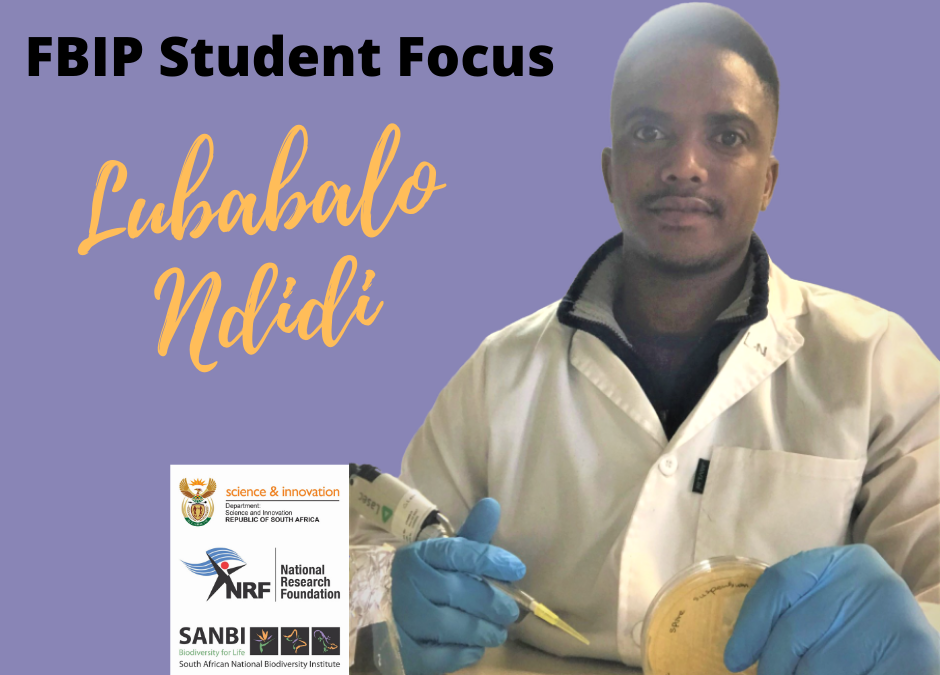 Lubabalo Ndidi is a 28 year old second year MSc student from Cape Town, Gugulethu. However, he says his family origins can be traced back to Eastern Cape.

He recalls that he has always wanted to be at the forefront of research to find new ways of helping people deal with issues that they experience daily.

“When I was younger, my family frequently visited the family homestead in the Eastern Cape and that is where I would be involved in helping with crops and cattle during the December holidays – we often experienced water scarcity which resulted in cattle and crops dying. Yet, twenty years later, we are still faced with the same issues in our rural communities,” he says.

Lubabalo strongly believes he is currently gaining skills which he knows will help and benefit his family, neighbours, and the village in its entirety.

The knowledge that he plays a part in research that is adding to the alleviation of food shortages and helping boost the South African economy by increasing the export of food to other countries, makes his career path even more satisfying.

He is positive that the research could help small farmers improve their outputs, increase their income, and feed their families for longer periods throughout the year. The most essential aspect, he says, is empowering people to feed their own (families).

“Biotechnology is not only limited to agriculture, but it also helps in healthcare and other industries (chemical etc),” he adds.

Looking back on his academic journey, Lubabalo says his deep love of science was one of the main reasons for undertaking an undergraduate degree in Biochemistry, Human Physiology and Anatomy at the University of Cape Town (UCT).

He says balancing the three subjects was a tough act. Yet, the toughest challenge was not knowing which direction to take after he had completed his undergraduate degree.

“I had so many questions like; where did I fit in? What opportunities would I have?”…

“I then decided to take a year out after my degree to gain some laboratory experience through interning at the University of Cambridge in the United Kingdom. The internship gave me a taste of life as a researcher and the urge to continue with my studies. I returned to South Africa the following year and completed my Honours degree at UCT,” he says.

Next, an opportunity to work with Dr Bronwynn Kirby-McCullough (at the Institute for Microbial Biotechnology and Metagenomics, University of the Western Cape) presented itself. Lubabalo says he knew he had to “(grab) it with both hands”. It offered him the opportunity to be involved in something he was genuinely passionate about.

In his current MSc study, Lubabalo is isolating and screening actinobacteria from soil associated with maize and wheat, from farms in South Africa for activities associated with plant growth promotion and protection.

Research on the impact of actinobacteria on maize and wheat yields in the South African context is lacking, he says.

This research will help find plant growth promoting actinobacteria specific to the South African context. The use of inoculum containing actinobacteria is one of the more sustainable and more environmentally friendly alternatives to the traditional use of chemical fertilizers used in agriculture.

Actinobacteria not only promote growth directly by making nutrients required by crops (readily) available, but they also produce metabolites that protect crops. Traditional approaches are expensive and have contributed to deterioration of farmable land – they have also led to contamination of drinking water sources.

Lubabalo says his research aims to add to the ongoing drive for sustainable alternative approaches, that allow the country to produce enough food for a rising population.

In terms of his aspirations for the future Lubabalo hopes he can continue developing his knowledge and skill set. “I want to use the skills that I have now and will still obtain, to benefit our people – this is what I aspire to,” he says.

“On behalf of my family, I want to thank the Foundation Biodiversity Information Programme (FBIP) and the National Research Foundation (NRF) for funding my education and allowing me to gain the skills necessary to continue to develop and contribute positively to my community in the future. Without your support I would not be on the path that I am on today,”