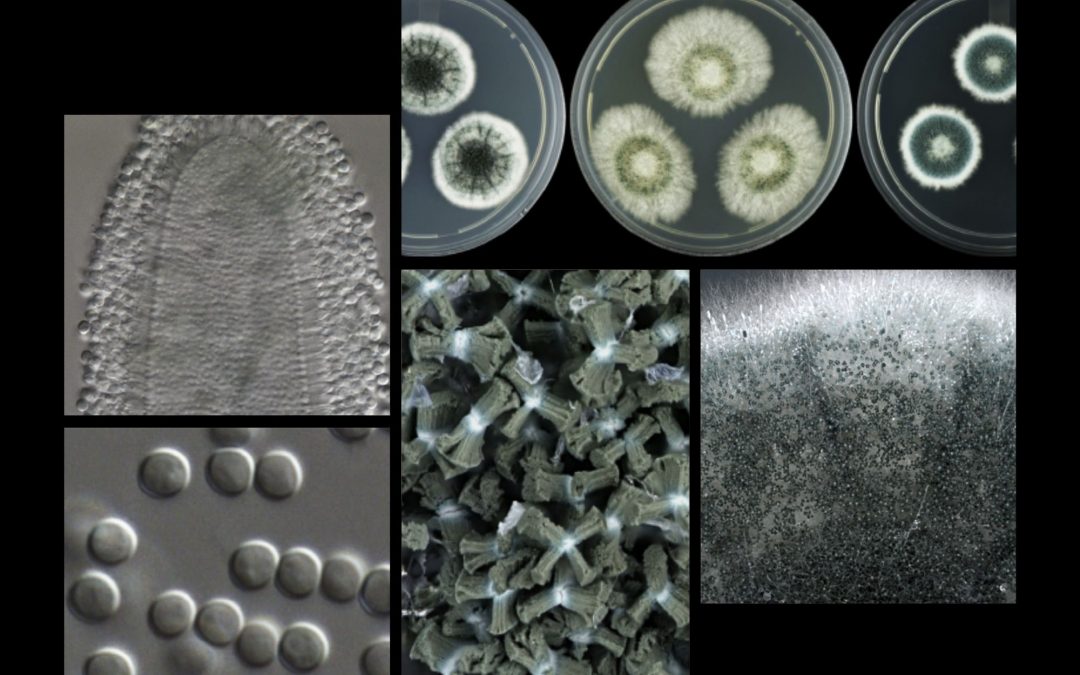 A recent South African study has made a small but significant dent in the ~3 million unknown species of the Kingdom Fungi, delivering seven new fungi species to science.

Approximately 148 000 species have already been taxonomically described globally, meaning that about 95% of the Kingdom exists in the darkness of the unknown.

As unsung as the members of the Kingdom Fungi are, so too (often) are the taxonomists who work to uncover and clarify the relationships in these ecologically integral organisms.

In an effort to immortalise mycology expert and mentor Dr Keith Seifert on the occasion of his retirement, study leader Prof Cobus Visagie named some of the newly discovered species after Seifert and his interests:

(Etymology: Latin, seifertii, named after Dr Keith A Seifert, a prominent Canadian mycologist specialised on mycotoxigenic genera and other hyphomycetes)

(Etymology: Latin, heltdiae, named after Margaret Vinci Heldt, the creator of the beehive hairstyle that was popular during the 1960s and famously Marge Simpson’s choice of hairstyle. This species resembles the beehive when observed through a dissection microscope)

The overarching fungal group under Visagie’s interest, Aspergillus, was thus named by Pier Antonio Micheli an Italian priest and biologist in 1729 when cataloguing moulds. The moulds resembled an aspergillum, a holy water sprinkler (from Latin Spargere-to sprinkle).

Aspergillus: the ugly, the bad, and the good

Aspergillus is cosmopolitan fungi occurring on a wide range of substrates, where they fulfil many different functions and have a wide-ranging influence on human and animal life.

Even though most species occur as saprophytes living on dead organic material, various species have an (economic) impact on humans.

Certain species are human pathogens causing widespread aspergillosis (fungus ball) or bad allergies, while a much broader spectrum of species is known to cause less invasive and/or superficial infections.

Aspergillus also causes widespread losses for agriculture where they spoil food or grow in agricultural produce, leading to mycotoxin contamination.

On a more positive note, Visagie tells the FBIP, species have industrial applications as producers of enzymes, drugs, organic acids or are used in food fermentations.

“For example, A. oryzae is used in a koji fermentation important for the production of a wide variety of oriental foods. Aspergillus niger is also used in an industrial fermentation to produce much of the world’s citric acid,” he says.

Despite the ecological and economic importance of Aspergillus, Visagie describes the group as “grossly understudied in South Africa” and that the only modern studies reported 23 species isolated from house dust and seven species from abalone feed collected in the Western Cape.

In addition, identifications are largely based on morphology, meaning that diversity could easily be misidentified due to the known complexities in distinguishing between closely related species without DNA sequence data.

Visagie says the aim of the project was to recover as many strains as possible from the collections and re-identify them using modern DNA sequencing approaches in order to obtain a baseline knowledge on the diversity of Aspergillus in the country.

“In our paper published in Studies in Mycology, we reported on the diversity discovered, formally introduced seven new species and released a large number of valuable DNA reference sequences in the NCBI nucleotide sequence database (GenBank),” he says.

In this way Visagie’s work makes available valuable data on Aspergillus to the scientific public – one of the key requirements to receive Foundational Biodiversity Information Programme (FBIP) funding.

Says Visagie: “we provided reference data for correctly classified cultures, and this is now available to other researchers for its potential use – this project will also greatly contribute to international knowledge generation on the systematics of Aspergillus”.

The study was carried out with funding from an FBIP Small Grant. The FBIP is funded by the Department of Science and Innovation (DSI) under the Global Change Programme and is jointly managed by the National Research Foundation (NRF) and the South African National Biodiversity Institute (SANBI).