Holding it together: the Cape dune flora 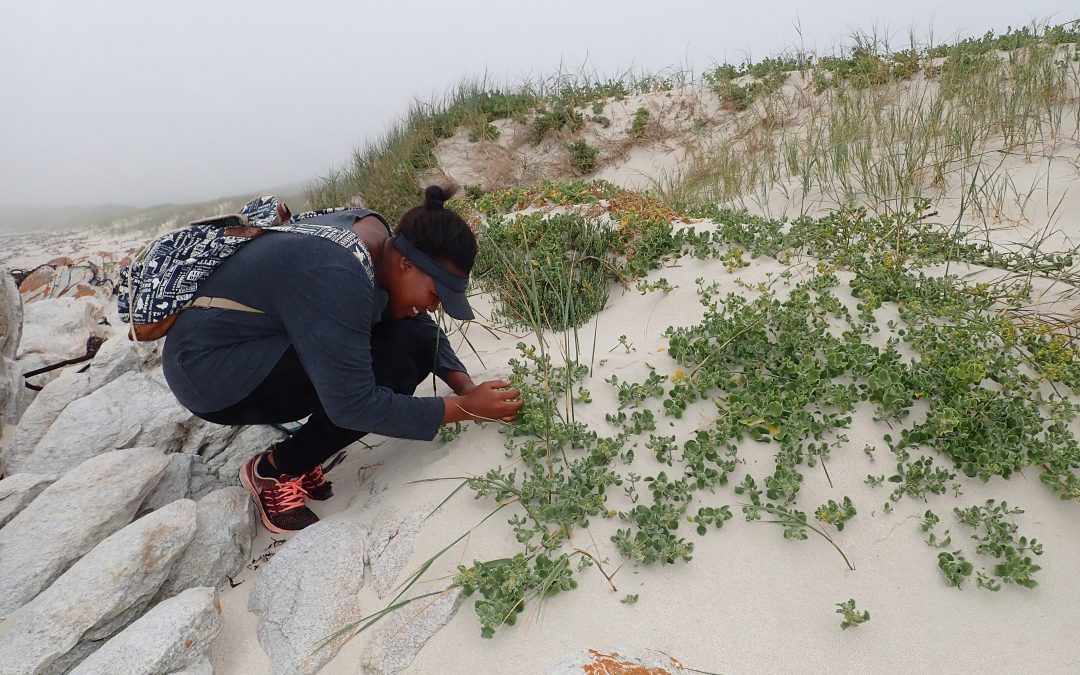 Featured image: a floristic survey of hummock dunes at Brandfontein near Cape Agulhas in the Western Cape.

The waves broke with a thunderous, yet hollow thump that I felt in my chest. It left me feeling exhausted and energised at the same time.

There are few things on Earth as powerful as the ocean, I thought while standing on the beach at St Helena Bay on the West Coast of the Western Cape. Yet, I soon realised that the ocean’s energy must somehow be absorbed or tempered… 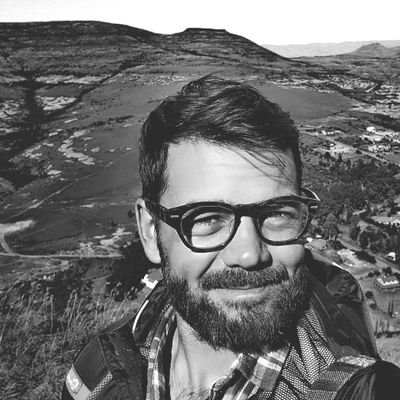 Earlier that month I spoke to Dr Adriaan Grobler, 36, who said that coastal dunes provide humanity with a very important ecosystem service. He explained that the Cape coast (between the Olifants River on the west coast and the Swartkops River on the southeast coast), his study site, is regularly exposed to gale-force winds that drive massive energy-laden swells toward the shore. Dunes and beaches help to dissipate this energy, which would otherwise quickly erode inland areas. Furthermore, dunes prevent flooding of coastal areas by providing a barrier to storm surges during extreme tides.

Yet, Dr Grobler continued, dunes do not operate in isolation. The grains of sand that make up the fluid geological dune structures would soon be carried off by the harsh Cape winds were it not for dune plants. These tough plants form a sprawling, interconnected, and variegated web around the Cape coastline that binds the dunes with their spreading roots and stems.

Plants living on dunes and near the seashore thrive in a challenging environment that only those with extraordinary gifts of evolution could withstand. This involves the tolerance to salt spray and high concentrations of salt in the soil, increased root, shoot and rhizome development to endure sand burial, and succulence to endure aridity among other things. 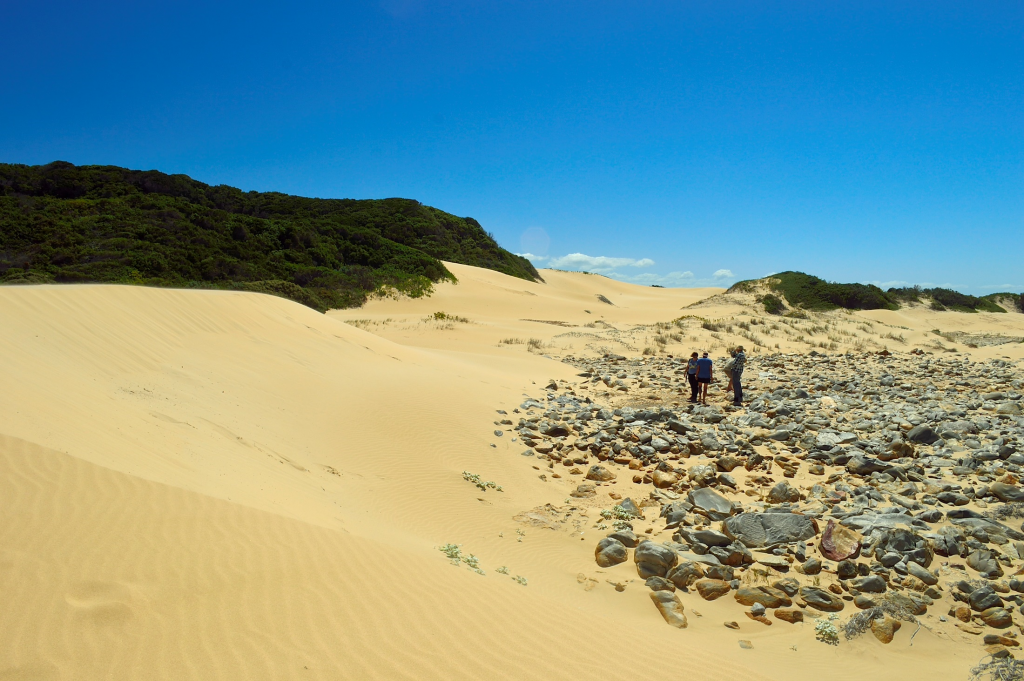 Mobile dunes, like these at Cape St Francis in the Eastern Cape, are often exposed to strong winds that sweep around sand grains – a harsh environment for dunes and people alike!

A first for dune flora

Dr Adriaan Grobler, a postdoctoral research fellow at the African Centre for Coastal Palaeoscience which is based at Nelson Mandela University in Gqeberha, says that given the projected sea-level rise due to climate change, the future of cities and towns along the Cape coast will greatly depend on maintaining our coastal dunes and its associated vegetation in a healthy state. 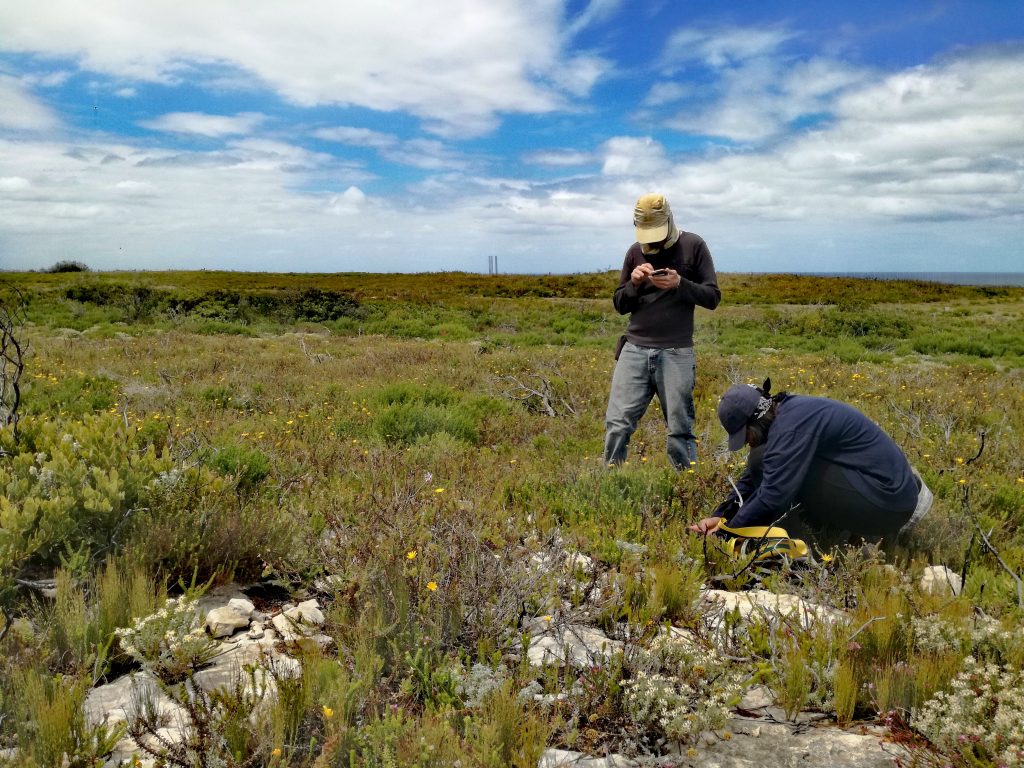 In 2019 Dr Grobler and his postdoctoral host, Prof. Richard Cowling, received a Foundational Biodiversity Information Programme (FBIP) Small Grant for studies that focused on the biodiversity aspects of the coastal flora of the Cape Floristic Region.

Dr Grobler said their studies provide a first comprehensive assessment and characterization of the spatial biodiversity patterns and flora associated with coastal dunes in the Cape Floristic Region (CFR). The CFR’s coastal dunes – and their associated flora – are likely to be some of the first ecosystems impacted by climate change-induced sea-level rise, and the outputs of Dr Grobler’s studies can provide a baseline for long-term monitoring and biodiversity conservation in these systems.

In addition, the studies also generated new knowledge about the natural capital, particularly the flora of a region that is known to be incredibly rich in indigenous edible and medicinal plants. Given the scope of the research, the work fits comfortably within the Department of Science and Innovation’s Global Change programme and is also in line with the department’s Bio-Economy Strategy where the natural capital can be used to the advantage of South Africa in the current and future economy. 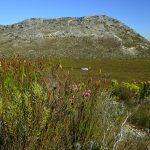 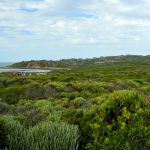 Dunes and their associated vegetation protect coastal settlements from the onslaught of the ocean, like here near Still Bay in the Western Cape. 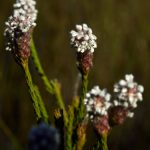 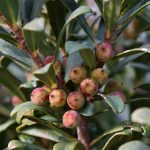 Rapanea gilliana (Myrsinaceae) is a low-growing shrub restricted to coastal dunes along the southeastern Cape coast, from Oyster Bay to Port Alfred. 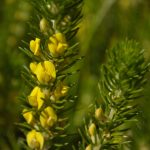 One of the most range-restricted dune-endemic plant species in the Cape Floristic Region: the Critically Endangered Aspalathus cliffortifolia (Fabaceae) was thought to be extinct, but recent floristic surveys in the dunes south of Gqeberha revealed that a few small populations persist. 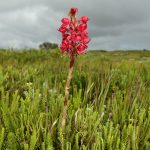 The bird-pollinated orchid Satyrium princeps (Orchidaceae) only grows on coastal dunes between Knysna and Port Alfred.

Dr Grobler says despite the Cape Floristic Region being relatively well-studied in botanical terms, the study fills key knowledge gaps. The vegetation and flora of coastal dunes in the region are comparatively poorly understood. Their work provides the first comprehensive description of the Cape coastal flora and sheds light on some of the diversity patterns associated with this floristic assemblage.

The findings showed that sea-level fluctuations over the past 2.5 million years have likely had a profound impact on the evolution of diversity patterns in dune floras of the Cape coast. As the research team expected, inland floras of the CFR, which were not historically impacted by sea-level fluctuations, typically support more species per unit area than coastal dune floras. However, the difference in diversity was surprisingly slight, taking into consideration the small and disjunct areas covered by contemporary dunes.

“We suggest that this is a consequence of the Cape’s physiography during glacial times, where much larger areas of dune habitat were exposed during times of lower sea levels along the now-submerged Palaeo-Agulhas Plain (see map). This vast habitat area, which was exposed during much of the past 2.5 million years, would have enabled the development of a species-rich dune flora in the Cape,” Dr Grobler said.

In addition, the team also aims to develop an integrated classification of vegetation types associated with coastal dunes in the region. 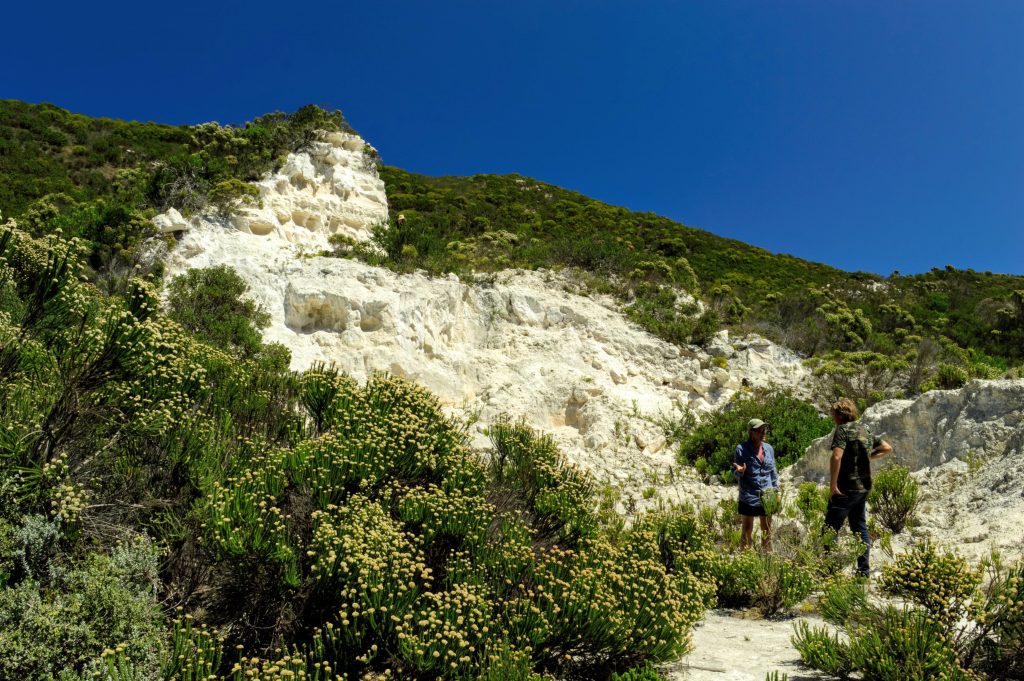 Limestone substrata, such as these at Grootbos near Pearly Beach in the Western Cape, provide plants with a challenging environment to grow in: very shallow, sandy and nutritionally imbalanced soils.

The knowledge will not remain unused in some obscure journal, as sometimes can be the case and has been published in the PeerJ open-access journal, meaning that it is freely accessible to the public. Moreover, the findings will feed into a World Heritage Site nomination where six archaeological sites along the Cape south coast, namely Blombos Cave, Border Cave, Diepkloof Rock Shelter, Klasies River Caves, Pinnacle Point and Sibudu Cave, are collectively to become a United Nations Educational, Scientific and Cultural Organization (UNESCO) World Heritage Site under the banner of “Modern Human Origins”.  A World Heritage Site is a place that has outstanding cultural, historical, natural or scientific value relating to the common heritage of humanity.

According to Dr Grobler, the vegetation and flora that formed the focus of their studies likely dominated the Palaeo-Agulhas Plain that was exposed during the lowered sea levels of past glacial climates. Thus, understanding this vegetation and flora helps to contextualise the coastal landscapes in which the cognitive revolution of early humans took place along the Cape south coast.

There are currently no UNESCO World Heritage Sites in the southern Cape, and the fruition of this nomination has the potential to significantly increase tourism revenues in the region. In addition, developing nations like South Africa are eligible for grants from UNESCO’s preservation fund to support the conservation of World Heritage Sites. Such additional funding could further improve opportunities for eco-tourism and palaeo-tourism in the region, as reported by  Dr Grobler.

As with any study, Dr Grobler experienced highlights and lowlights. Fieldwork was a highlight where he relished time immersed in nature along one of the most beautiful coastlines in the world. The team was very fortunate in having access to remote areas that are generally not open to the public. “One of these areas – Groot Hagelkraal near Pearly Beach – has been called the world’s “hottest” biodiversity hotspots as it harbours many of the rarest plants in the Cape: six local-endemic and 21 regional-endemic plant species – I managed to see a few of these during our visit, like the Endangered and locally endemic Spatalla ericoides (common name: Erica-leaf spoon),” Grobler said. His least favourite part of the project was sitting in an office and writing the papers, which he said is “terribly” hard work compared to the fieldwork.

In addition, the COVID-19 pandemic has been a major challenge, and also impacted the work done on the papers in question. Dr Grobler said the lockdowns and travel bans implemented in South Africa during the first half of 2020 meant that they had to abandon some fieldwork excursions, which they were luckily able to make up for, in part, in the latter half of that year.

COVID-19 protocols also fundamentally changed how colleagues interact with each other. “Whereas before we could meet daily over a cup of coffee to discuss ideas during our breaks, we have, for the past year-and-a-half, had to rely on virtual meeting platforms, which is just not the same. In the same vein, where we used to be able to share our current work and develop ideas with colleagues based at other institutions during in-person conferences, we now attend virtual conferences and try to communicate ideas via the internet. And while the innovations that have come with this disruption have been exciting, it has also been a major challenge to adapt to this new way of doing things,” he said.

New ways of doing things are the order of the day as rising sea levels threaten to swallow beaches. A 2021 study published in the Journal of Outdoor Recreation and Tourism found that at least 80% of Cape Town’s 2019/2020 Blue Flag beaches were under threat from rising sea levels and coastal erosion.

“The increase in carbon emissions and consequent increase in temperature has been marked by a spike in extreme weather events inland and near coastal areas,” it said. The study cited the 2018 intergovernmental panel on climate change special report on the impacts of global warming of 1.5° C above pre-industrial levels. The report warned that human beings had caused global temperature to increase by about 1° C and that it was on course to reach the tipping point of 1.5° C by 2030 if greenhouse gas emissions are not drastically reduced”.

People and nature, a disconnect

When asked about the challenges facing the planet, Dr Grobler says it comes down to the disconnection between people and nature. He believes that this is the root cause of most environmental degradation and biodiversity loss that has taken place in the world over the past three centuries, and is also partly responsible for many of the societal issues we are facing today.

“The disconnection between people and nature – I think providing people with first-hand experiences of the natural environment, together with meaningful engagement about the importance of intact, functioning natural systems for the prosperity of people, would help to combat most, if not all, other planetary challenges,” Dr Grobler remarked.