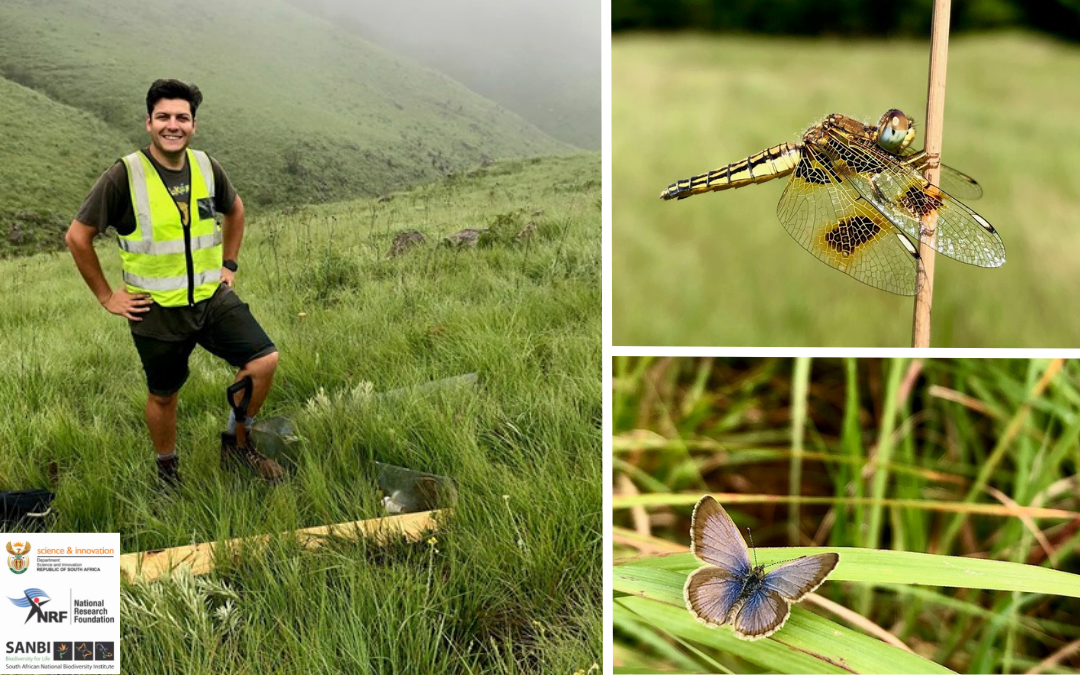 Dr Charl Deacon remembers the sense of awe he had during his first encounter with an insect as if it was yesterday – he was very young and it was a “giant stick insect”.

“They are quite rare now,” he says with the benefit of the knowledge that comes with many years studying these creatures.

The 28-year-old has had a passion for the natural world for as long as he can remember and growing up in the small town of Kathu in the Northern Cape he always preferred the outdoors as opposed to being cooped up inside.

His heart is rooted in entomology and ever since that first encounter he has been hooked on the fascinating world of insects.

“I have a great passion for all insects related to water, but I also love to study how insects interact with various elements in the landscapes they occupy,” he says.

Charl is currently a postdoctoral researcher at the University of Stellenbosch and his entomological research is funded by the Foundational Biodiversity Information Programme (FBIP).

He is being hosted by Prof Michael Samways and Prof James Pryke. “I have great respect for both my hosts, and I have learned a lot from them over the last few years, and still do!” he adds.

He took some time to tell us about his studies and how they will make a difference:

“I am currently doing my post-doctoral research in KwaZulu-Natal, with a main focus on landscape ecology. Specifically, I am investigating the importance of grassland variability for insects, and if certain insects or insect behaviours are associated with certain landscape features.

These features include rocky outcrops, damp areas, and erosion scars. One sees a grassland and tends to think it is all about the grass, but thus far we know that these landscape features or elements are extremely important for a range of insects. They often facilitate breeding and feeding, and they also function as local areas where insects seek refuge during the hottest and coldest times of the day.

These landscape-scale studies are extremely important because it adds to our knowledge of land preservation. In other words, it helps us to select certain areas that should be protected at all costs to avoid catastrophic major extinctions of insects. They are also important service providers, and without insects, several basic ecosystem functions cannot be completed.”

Charl says that with South Africa’s wonderful natural assets and wide range of study organisms to choose from, being a scientist might sound easy. However, he says the career is not without its challenges – funding being one of them.

“It can sometimes be extremely difficult to obtain funding for certain studies, and opportunities may not be as available compared to Europe and parts of the USA. But, over the years I have learned that one should never stop trying, and all feedback, including negative feedback on your work, is good feedback from which you can grow,” he says.

Further, he believes that through hard work, dedication and collaboration one can always create new opportunities for yourself, and your peers.

His best advice to younger students: “The most important quality of any scientist should be to remain positive, and try a bit harder every day.”

Charl would love to stay involved in insect conservation studies, because of their importance, yet he believes there is so much more to learn.

“I would never want to lose my connection with nature, and I would like to keep on showing that field science is extremely effective – to really understand biological systems, one needs to walk on the soil, touch the plants, and closely observe insects (or other organisms) in their natural environments,” he says.

He would also like to raise the profile of local science in the global context, to open up more opportunities for future scientists.