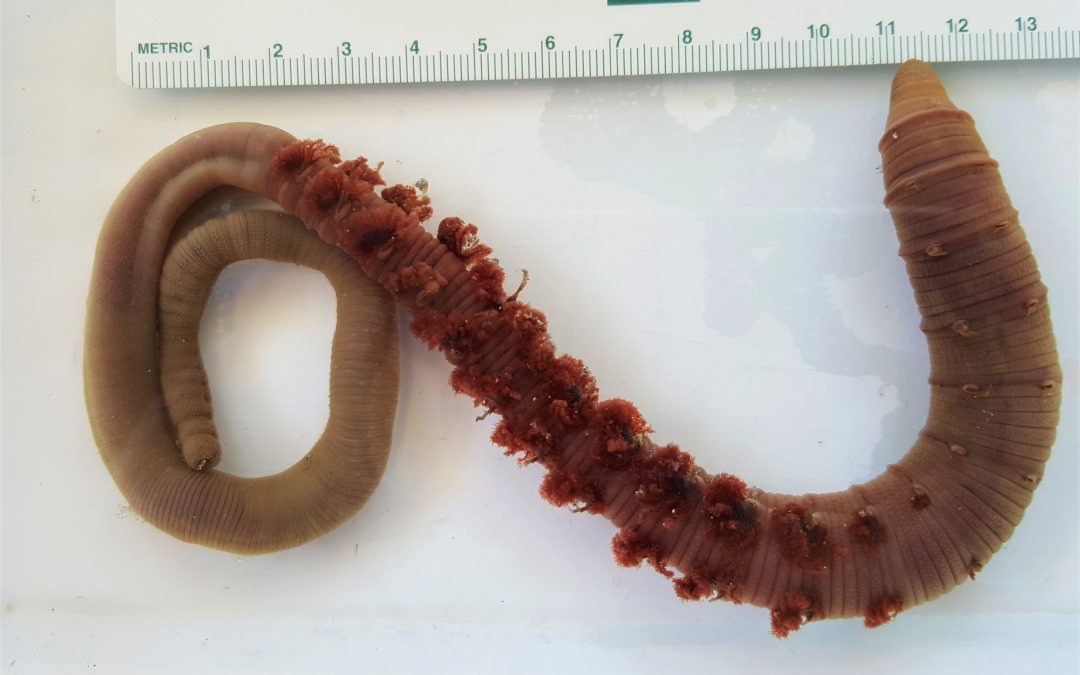 Cape Town – The legal number of bloodworm that can be collected per day has not changed since the 1970s, according to Prof Carol Simon.

Simon is an Associate Professor at the University of Stellenbosch who seeks to generate knowledge on South Africa’s marine bait polychaetes for better decision making.

“Bloodworm is probably the most popular polychaete worm harvested to be used as bait in South Africa” she told the FBIP, holding up what looks like a very flaccid and featureless snake.

Despite its popularity among local fishermen, not much is known about the bloodworm’s population structure and whether populations can cope with current levels of extraction.

Scientists have been saying for decades that the species is vulnerable to local extinction if overexploited, but the legal number of worms allowable for collection has not changed since the 1970s.

In addition, population sizes of bloodworms have not been documented since the 1970s and 1980s. This means that the restrictions on bait collecting are based on very outdated information.

Bloodworm can be found in the intertidal area of coastal marine and estuarine environments where they burrow into silt and sand.

Simon says that the use of genetic data helped her research team understand bloodworm population structure without the need to dig up vast amounts of sediment to count worms, and could indicate whether there was gene flow among populations.

An indicator of gene flow among populations of bloodworms is important to determine the risk of extinction, such as when isolated populations have little recruitment of larvae from other populations, Simon explains.

The team performed modern molecular analyses on samples from along the South African coastline from Saldanha Bay on the west to Knysna and Swartkops on the east coast.

According to Simon, the results show that bloodworm populations are not as vulnerable as previously thought, and since gene flow among populations is higher than expected based on what is known about the dispersal abilities of the species.

This means that gene flow between individual populations provides protection against local extinctions.

The study was recently published in African Zoology and was funded by a Foundational Biodiversity Information Programme (FBIP) Small Grant.

However, Simon says bait collecting should not continue unabated nor should managers give in to demands from collectors that the number of worms taken per day be increased.

“This is because a large proportion of the recruits in each population comes from WITHIN the population. This means that if too many worms are extracted, too few larvae may be produced to replenish them – if coupled with too little recruitment from other populations, populations will crash,” she says.

Simon explains that the isolation of individual populations may increase under current climate change scenarios: “if less freshwater flows into rivers, their mouths will remain closed for long periods which will reduce opportunities for recruitment to and from other populations. And this will increase the chance of populations going extinct.”

Bloodworm users are advised to not exceed daily allowable catches of worms.

Simon says FBIP-funded studies like these are needed to inform scientifically defensible management decisions, and that these studies need to be repeated regularly to keep data current – as times changed, so has demand for bait changed.

For example, demand for polychaete bait in Knysna has increased since the 1990s, and management bodies need to ensure that extraction remains sustainable.

A key requirement for FBIP-funded studies is that resulting data are openly available to other users, and the dataset from this study can be downloaded from FBIP and GBIF websites.

The specimens themselves are being used for ongoing morphological research, says Simon, and will be deposited at IZIKO South Africa Museum when the research is completed.