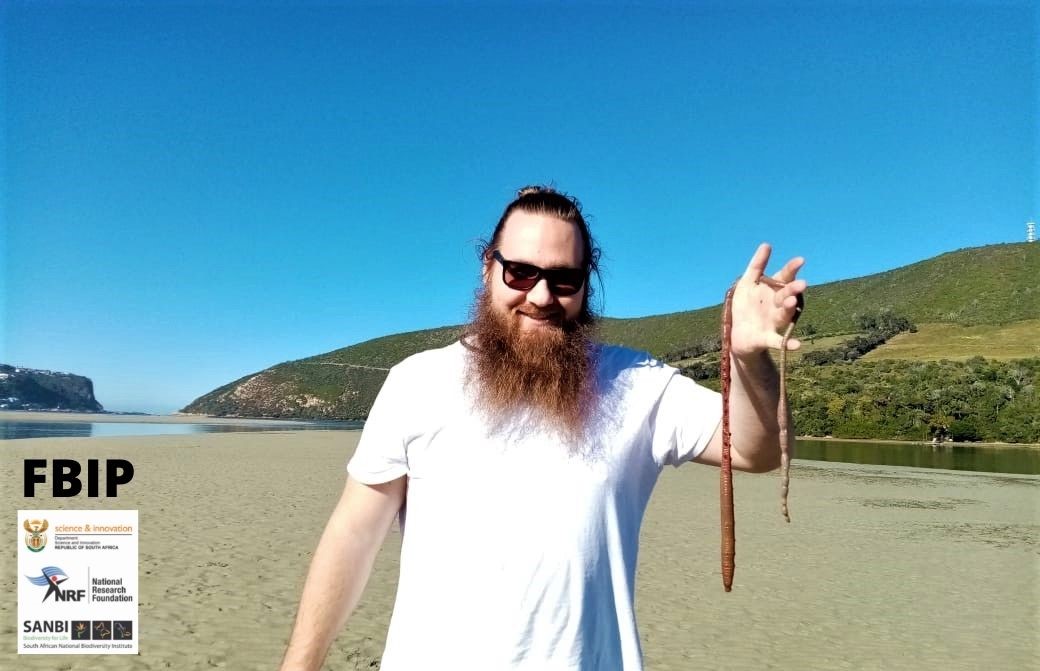 Hendré van Rensburg, like most people, did not grow up telling people that he wanted to study worms. Quite the contrary.

His younger self was convinced that he was cut out for engineering; he would use science to create. Consequently, his school years were focused on mathematics, physics, and computer science.

One night while bartending at the local student watering hole his academic career took a wild turn. Hendré says it was on a quiet night when bartenders have the chance to chat to patrons to kill time.

He struck up a conversation with a bargoer who mentioned that he was a BDE (short for Biodiversity and Ecology) student.

As the conversation unfolded Hendré heard of a degree where students went on field trips, collected data, wrote up projects as scientific papers and learned all about life; how it grows, evolves and connects to form ecosystems.

“It sounded so interesting and fun!” he says, recalling that night.

After some thought, the technically inclined Hendré made the difficult – but also not too difficult – decision to leave engineering for BDE. He has since never looked back despite challenges like not having biology at school and having to work nights as a waiter, bartender, and DJ to finance his studies and student debt.

While prospecting the Stellenbosch University Botany and Zoology department for MSc projects, he was drawn to an FBIP-funded project with polychaete expert Prof. Carol Simon.

Prof Simon told him about a project on some of the worms in the Knysna Estuary – rated as South Africa’s most important estuary for conservation due to the ecosystem services it provides. She explained that there were worms that she thought would be worth investigating as they did not clearly fit any previous taxonomic descriptions.

His brief: he would have to go find the worms, use morphological and genetic techniques to properly describe/identify them, and look into the density and distribution of the population in the Knysna estuary.

“Now, I don’t believe many (if any) people grow up saying “I want to study worms!”, but, I thought this study was interesting as it would allow me to greatly expand my skill set by learning about many different disciplines instead of just one as with many other MSc projects on offer,” he says.

‘Shines in the moonlight’

Hendré’s study organism, moonshine worms, are economically important marine polychaetes. He suspects they got their name from the iridescent shine that can be seen all over the worm in certain lighting conditions. These conditions can be found during full moon (spring tide) when many fishers go baiting in the evenings after work. “So it ‘shines’ in the moonlight,” he says.

The segmented worms are large and can be more than 1cm thick and up to 40cm long and are prized as fishing bait. He says they have great economic importance, particularly for low-income or no-income fishers. “They are an extremely popular bait species, which are used to catch fish for self-consumption or selling. Some baiters in Knysna also illegally sell them directly to recreational fishers to generate extra income,” he says.

However, moonshine worms are not only important for their economic value. Closely related species are known to increase biodiversity in their surroundings by planting reproductive shoots of eelgrass and providing shelter for smaller organisms living in the sand. They also stabilise surrounding sediment which can help prevent or delay erosion. Finally, worms in this genus are vital sources of food for fish as well as birds but importantly, none of the above has been shown for the moonshine worms in the Knysna estuary.

Considering its economic and ecological importance, Hendré set out on a journey to figure out which moonshine worm species made its home at the Knysna estuary. He followed leads from earlier taxonomists, particularly the seminal works of marine biologist Dr John Day who published a two-volume Monograph on the Polychaeta of Southern Africa in the sixties. According to Hendré, Day was heavily influenced by his contemporaries, who all believed that it is common for a single species to be found worldwide. However, recent biogeographical studies have shown that this is highly unlikely.

Day mentioned the occurrence of a worm – Diopatra neapolitana – in the Knysna estuary. But his description of this worm was not as detailed as modern descriptions and did not exactly match the one Hendré found in his initial investigation. Thus, the former engineering student’s work began to determine not only which species was present in the estuary, but also how they were distributed and in what densities.

He experienced bliss while doing fieldwork in Knysna with its arresting natural beauty and also enjoyed getting to know more about the town and its friendly people. He also cites the pleasure of learning how to read an organism’s genetic story through DNA sequencing and using high powered scanning electron microscopy to look at differences and similarities between his samples and older specimens.

Yet, it was not always easygoing. Hendré had to navigate the steep learning curve of thinking, investigating, and communicating like a taxonomist, for whom he has developed profound respect.

“I have gained a tremendous amount of respect for taxonomists; it is an extremely difficult job that requires a broad skill set that has to be executed with absolute precision and with little thanks, as taxonomic papers often don’t get many citations even though all other study fields require taxonomy as a base,” he says, adding that you can’t study anything, or say anything about what you did if you do not know which species is which.

The first report for SA

Hendre’s investigation led to some interesting results. He found that the moonshine worms in Knysna are not D. neapolitana but rather D. aciculata, a worm that has never before been reported from South Africa. Diopatra aciculata was originally described from Australia in the 1970s.

The finding caused uncertainty as to whether the species naturally occurs in both South Africa and Australia or if it is invasive in one of these countries – pending genetic studies will clarify this. He also found that the worms occur throughout most of the estuary in high and low densities, distributed patchily.

Hendré says the distribution information is vitally important for the management of the species as it is important to know which areas have the highest densities so that conservation managers can either protect them (if they are not an invasive species) or remove them (if they are invasive and threaten local biota).

Hendre’s study is of great importance to the South African Bioeconomy and Global Change – key thematic areas of the Foundational Biodiversity Information Programme (FBIP). In addition to contributing knowledge to the bioeconomic aspects related to the subsistence fishing community, it also informs the status of global change.

“With a changing climate and continuous polluting of the environment we need to have an accurate database of our biodiversity and which ecosystem services each of the species provides, so that we may prioritise and protect the most important ones to prevent ecosystem collapse,” he says.

Hendre’s Master’s project has contributed to two scientific publications and has led to a PhD where he will be investigating the importance of moonshine worms as a resource and as a consumer within the estuary. His Masters’ work also led to another PhD project, which investigates the reproductive cycles and more fine-scale genetic differences between the moonshine worms in South Africa, and a post-doc project, which investigates the impact that the moonshine worm has on its surrounding biodiversity, all being undertaken by other members of Prof. Carol Simon’s Polychaete Lab.

Looking into the crystal ball for the next few years he sees himself doing research and teaching at tertiary level. “I really enjoy teaching and tutoring younger students at the university level, and I would also like to continue doing research in marine science – our coasts and sea life is still greatly understudied and I would like to keep contributing to our scientific understanding of our great South African biodiversity!”

This study was funded with an FBIP Small Grant to Prof Carol Simon (Stellenbosch University). The FBIP is funded by the Department of Science and Innovation (DSI) under the Global Change Programme and is jointly managed by the National Research Foundation (NRF) and the South African National Biodiversity Institute (SANBI).