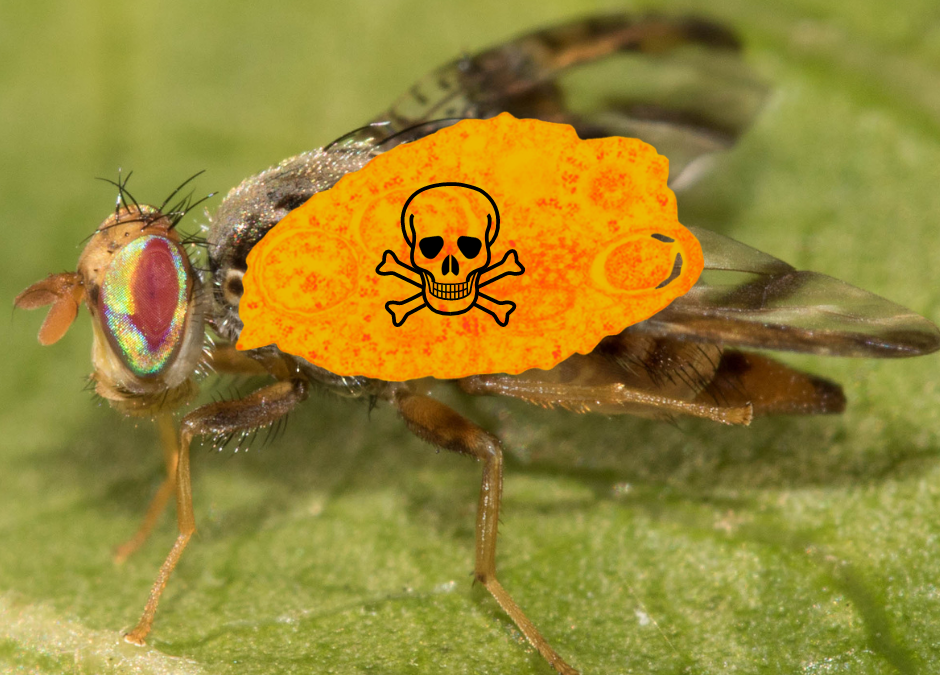 This is the estimated crop loss and control costs caused by fruit flies in the Western Cape alone.

Moreover, a quarantine ban on the export of South African fruit due to the presence of fruit flies can be devastating to the economic welfare of our local communities and businesses which are dependent on a profitable and viable fruit sector.

Onkgopotse Seabi is a 27-year-old University of Pretoria MSc student who is doing her bit to reduce the devastation wrought by fruit fly infestations across the country.

Yet, her path to studying insects was not a straight one. She gave entomology (i.e. study of insects) a miss in her first academic year. In her third year, after seeing a friend prepare an insect collection project, she realized how diverse local insects are – she immediately opted to add a few entomology subjects to her undergraduate degree.

“I discovered that the work to be done on insects is vast and variable, and as interesting as work with [vertebrate] animals and humans,” she told the FBIP. 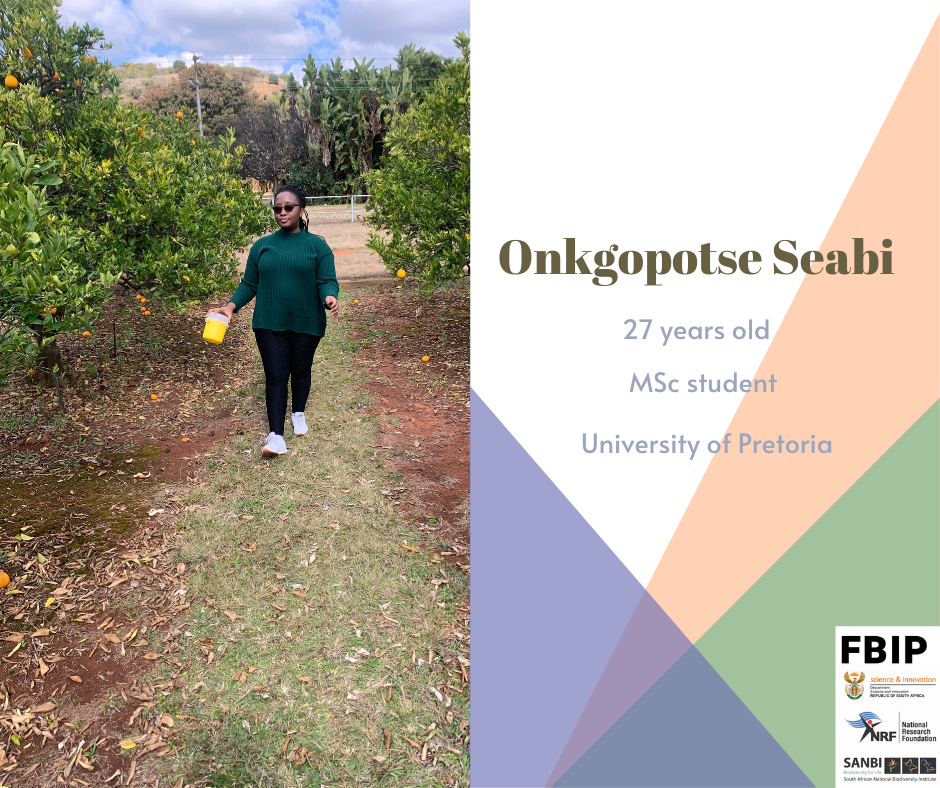 Upon successfully completing her third year, Onkgopotse seized an opportunity for postgraduate studies on a fascinating ‘endosymbiont’ bacteria with Prof Amanda Bastos and co-supervisor Prof Chris Weldon, University of Pretoria’s expert on ‘flies of economic significance.

If the fruit fly is the proverbial City of Troy, then the Wolbachia bacteria is a trojan horse. 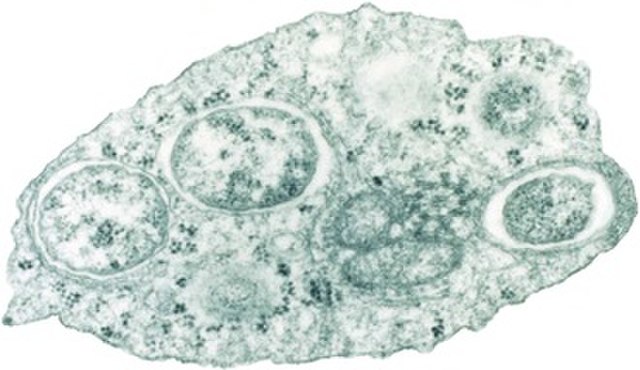 It enters its fly host and wreaks havoc from the inside: it is able to manipulate host reproduction by causing male feminization (i.e. development of physical characteristics that are usually unique to the female of the species), parthenogenesis (i.e. reproduction of infected females without males), male killing, and most importantly, says Onkgopotse, cytoplasmic incompatibility (CI).

With CI, fertilization of uninfected insect eggs is unsuccessful if the sperm originates from an infected male, or where both sexes are infected but with incompatible Wolbachia strains. 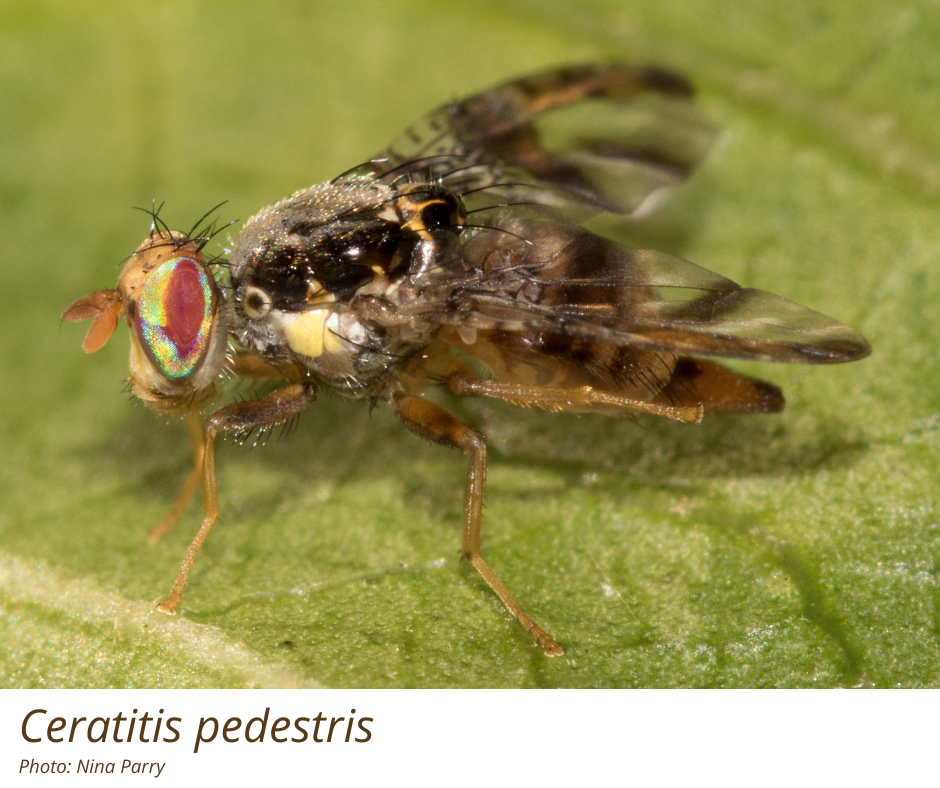 True fruit flies belong to the family Tephritidae and are among the most important agricultural pests worldwide. Tephritid fruit flies cause direct damage to a wide variety of fruit and vegetables.

Females lay their eggs into fruit/vegetables where they hatch and have plenty of food for growth. The damaged fruit then provides fertile ground for bacteria, mould, and other insects – double damage exacted upon the fruit.

For these reasons, some species of Tephritid fruit flies are monitored and subjected to phytosanitary regulations internationally.

This has led to large control and management demands both locally and internationally.

New control methods that can be combined to form and improve existing Integrated pest management (IPM) programmes are of great interest to both researchers and the fruit value chain.

One such control method is the Incompatible Insect Technique (IIT), which relies on the transmission of bacteria between fruit flies to cause their sterility under certain conditions.

Wolbachia is a bacterium that is considered for IIT programmes and has been investigated as a cost-effective and environmentally friendly IIT control strategy for fruit flies. 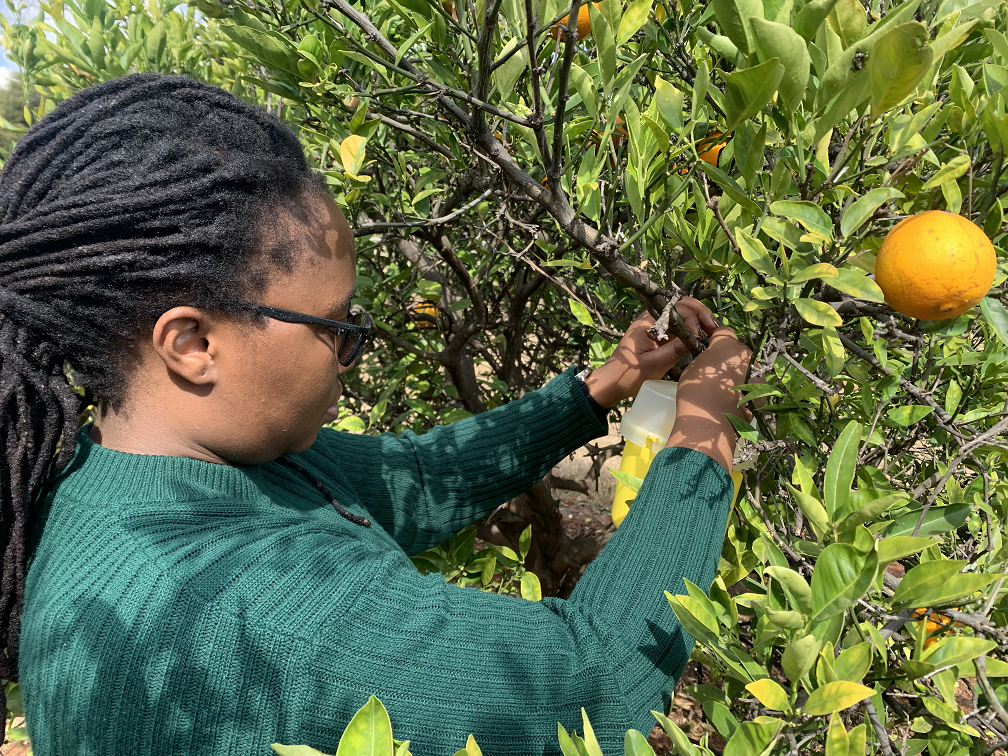 The two-year project delivered a genetic sequence for the Wolbachia present in fruit flies caught in South Africa.

Onkgopotse says this sequence is crucial as it tells us which strain of Wolbachia is available from which sampling sites.

A deeper look into the genetic sequence opens the world of ‘haplotypes’ which allows Onkgopotse and her colleagues to infer how the Wolbachia populations interact and how they are being spread.

The project also provides us with a prevalence record for Wolbachia in fruit flies caught in the South African Highveld and Lowveld. This allows for comparison of Wolbachia infection when future screening is done and will provide essential information for the next steps in IIT.

Onkgopotse found that there was a low prevalence of Wolbachia in fruit flies, which means that Wolbachia could be introduced to achieve control of fruit flies.

First, however, this would have to be preceded by an investigation into the artificial infection of fruit flies with Wolbachia and whether the Wolbachia detected in the wild can be used for control.

Greasing the wheels of science

Onkgopotse has added momentum to the moving wheels of science with her studies. Before her project, there was no information on Wolbachia infection of pest fruit flies in South Africa.

“If further work is pursued on this system, a pest control method that is environmentally friendly and cost-effective may be developed,” she says.

This control method would allow South Africa to be more competitive in the agricultural sector and would help us solidify our rankings among the top suppliers of certain fruits and vegetables worldwide.

On a local level, this may help us to maintain affordable fruit and vegetable prices, allowing all South African citizens to have the necessary nutrients for development and growth. While in the long run programmes like pest control may aid with food security in South Africa and ultimately aid in achieving the second Sustainable Development Goal – zero hunger.

Onkgopotse’s contribution to science and the country’s future food security came at a personal cost.

As with many other students and people in other professions, COVID-19 and the lockdown had an unexpected impact.

“I had to accept that unexpected things may occur and change the timeline that you had set for yourself. I also experienced burnout and mental fatigue as once we were allowed back on campus, I tried to catch up on the time lost due to lockdown,” she says.

To overcome the situation she had to rely on friends and family for support when she was down, and also relied on her supervisors to remind her and point out when she was setting herself up for failure and disappointment.

In the future, Onkgopotse would like to work in Academia as a lecturer and supervisor. She plans to complete her MSc and PhD.

After this, she hopes to pursue post-doctoral studies where she may conduct further research and supervise some students, while she waits for a lecturing opportunity.

The FBIP is funded by the Department of Science and Innovation (DSI) and jointly managed by SANBI and the National Research Foundation (NRF).