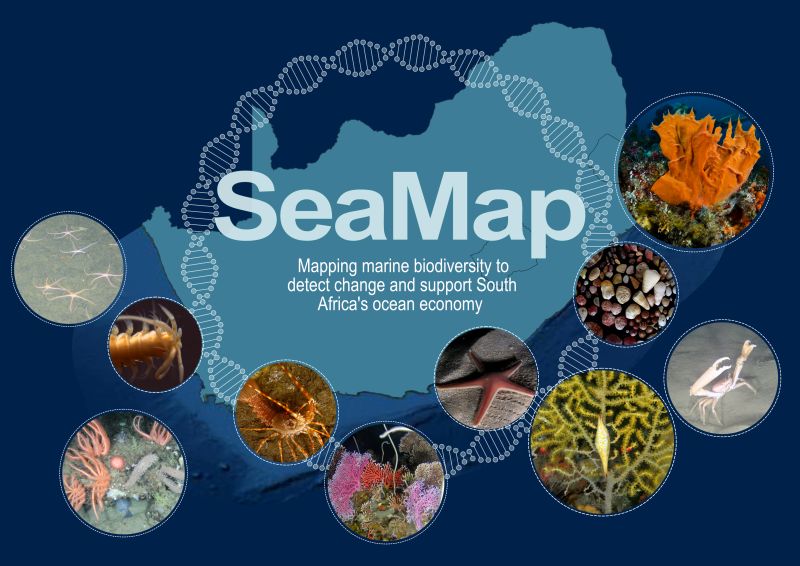 This article was first published in the SAEON eNews

The primary aim of FBIP projects is to generate, manage and disseminate foundational biodiversity information and knowledge to improve decision-making, service delivery and create new economic opportunities. More information about FBIP can be found at www.fbip.co.za.

In alignment with this overarching aim, at the end of the three-year project (2022–2024), SeaMap aims to deliver South Africa’s first data-driven marine ecosystem map derived from associated species occurrence and barcode records. This output will support marine biodiversity assessment, spatial planning, monitoring for change and development of the ocean economy.

Several training and capacity building workshops will be held to support barcoding and data management and the development of a Red Listing strategy for marine invertebrates. SeaMap will contribute towards international polychaete taxonomy training and in building capacity to advance science into policy.

To increase awareness of the need, value and importance of marine taxonomy in the younger generation, SeaMap will develop marine taxonomy lectures customised for South African ecosystems, targeting both high school learners and undergraduates and, for the younger enthusiasts, an illustrated children’s story that integrates marine taxonomy concepts.

Throughout the three-year project there will be an emphasis on opportunities to engage students and emerging researchers to grow their skillsets; from how to optimise sampling for genetic opportunities, how to better manage one’s data and how to ‘make your science change the world through empowering young researchers in how to integrate their findings into informing governance policies.

Critical data to be unlocked

The SeaMap team includes 20 co-investigators from 13 South African institutes spanning the Western and Eastern Cape and KwaZulu-Natal. This ensures improved national coverage of our marine ecosystems consolidated under the SeaMap umbrella, resulting in better cohesion, information sharing and knowledge gained for all working in offshore ecosystems.

Through the outputs that SeaMap will deliver, the project will unlock critical marine invertebrate data to contribute towards South Africa’s first national data-driven marine ecosystem map, classification and assessment. Such data will also provide critical baseline data against which biodiversity changes can be monitored in response to a changing environment. The genetic information generated will be channelled to support marine natural product research for marine invertebrates and their associated bacteria and compounds.

This ambitious and exciting project is just starting out and there is plenty of scope for young researchers in the fields of foundational marine biodiversity and genetics to get involved. Please contact the project principal investigator, Dr Lara Atkinson, if you would like to find out more.