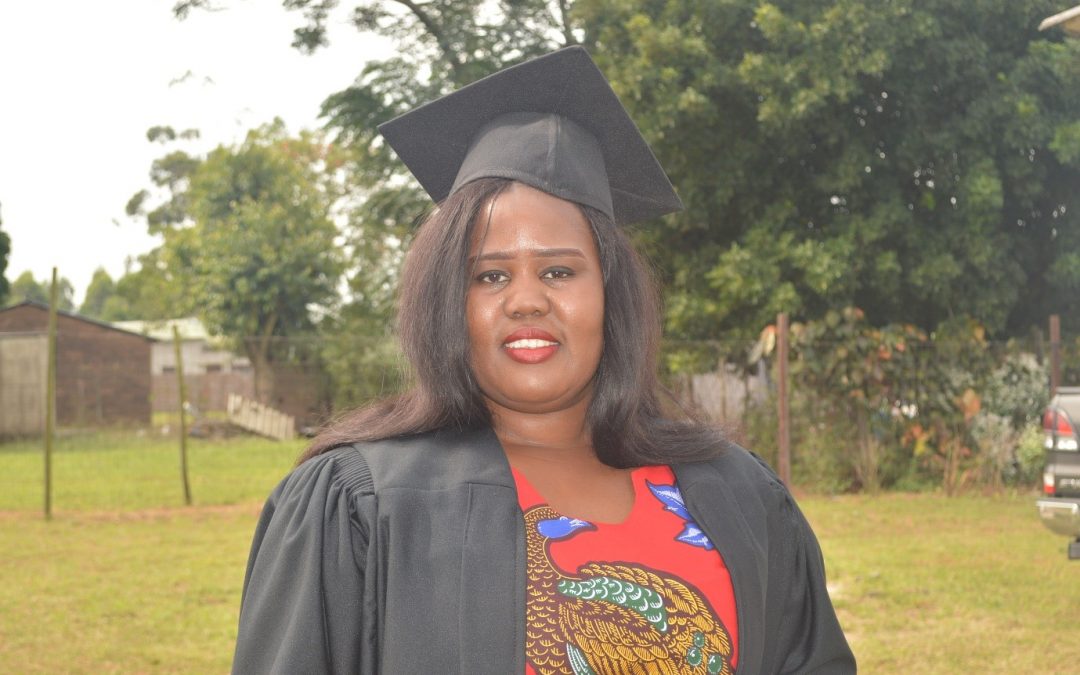 Gciniwe Mercy Sithole has a strong character and much determination, she describes it as a “never give up spirit”. Born and bred in the deep rural areas of Matholonjeni at Kwa-Dlangezwa, Northern KwaZulu Natal she had to walk an hour every day to get to school.

Determination saw her finish high school in 2003, with full matric exemption which allowed her to be admitted to university for a bachelors’ degree. Coming from a disadvantaged background, transitioning from high school to varsity was the greatest challenge she ever faced.

Regardless of the challenges, her strong character kept her going, at some instances she recalls having gone to bed without food since her family could not afford any. To make matters worse and during her undergraduate studies (2006) she lost her home when they were kicked out of the house by family members.

All those challenges never broke her spirit, she soldiered on and finished her degree in 2008. She took a gap year (2009) and tried to search for a job – she only managed to get a position as a substitute educator for three months. Determined to do better in life, she used her salary to register for an honours degree (2010) and luckily she also got a bursary from NRF (National Research Foundation) which assisted her to successfully complete her degree.

Even though she still wanted to study further, her mother was very ill and she had to find work and provide for the family. She got employed as an educator, but her mother encouraged her to never give up on her dreams of furthering her studies.

In 2013, Gciniwe’s mother passed on. This led to a break down and she was diagnosed with chronic moderate depression. She lost her job and had to stay unemployed for the whole of 2014 attending therapy to cope with her situation.

This period gave her plenty of time to think about her life and about what she really wanted as a person. Regardless of how much people mocked her for being an unemployed graduate she never succumbed to that pressure, she remained strong and decided to continue studying.

In 2015 she registered for her Masters’ degree (dedicated to her mother) which was also funded by NRF and she obtained it in 2017 with merit. During her time as a masters’ student she worked in various community outreach programmes within the University of Zululand Faculty of Science and Agriculture assisting high school learners with career choices.

She also became a mentor for Eskom Expo for Young Scientists. She always made time to assist grade 12 learners with their applications (university admissions, NSFAS funding and various bursaries). She also uses the advantage of having internet access to look for bursary opportunities and learnerships and informs learners in her community about opportunities available.

Her experiences in life have taught her that, “when life opens the doors for you, you must not shut it for people behind you to enter, rather assist them to follow you as long as the door leads to light”.

Gciniwe uses every opportunity she gets to grow herself and those around her. She firmly believes that a strong nation cannot be built from envy and jealousy. She is now pursuing her PhD which she started in 2019 at the University of Pretoria under Prof Thulani Makhalanyane. She never allowed her past experiences to hinder her from achieving greater heights.

She hopes that her life story inspires others to never give up on life, at some point you may break down but you have to get up, dust yourself and show the world what you are made of. Indeed, the half has never been told. After completing her PhD she wishes to work at any company or institute that will allow her to give back to the community and be an inspiration to other young female scientists.

What is Gciniwe’s PhD project about?

This may lead to increased in antibiotic resistance of bacteria present in the food chain of humans and livestock, from soils and harvested vegetables up to the human consumers. This study forms part of the FBIP funded project entitled, ‘Defining functional microbiomes of two major crops in South for improved productivity’. This is an FBIP Large Project (Principle Investigator: Prof Karin Jacobs) with Prof Makhalanyane as a co-investigator and through which Gciniwe received an NRF grant-linked bursary.

One of the main aims of the aforementioned FBIP Large Project is to “investigate the role the microbiomes plays in creating the resilient cropping system”. This includes the characterisation of the microbiome of both winter wheat and summer maize under conventional and conservation agricultural practices.

Therefore, there has been a growing concern and impetus to study microbiomes in relation to crop production. Since microbiomes are defined as combined genetic material of the microorganisms in a particular environment, ARGs also occurs within microbiomes.

Antibiotic resistant genes have been labelled as an emerging environmental contaminant. They have thus gained much attention due to the possibility that they may pose a risk to human health. Widespread and uncontrolled use of antibiotics combined with their fate and transport into the environment poses a risk to public health and result in the development of antibiotic resistant organisms (ARO).

Therefore, it is crucial to improve understanding of the mechanisms associated with the spread and development of ARGs in microbiomes to assist with environmental monitoring and policy making by the relevant stakeholders.

This study seeks to provide better understanding of the extent to which ARGs (labelled as environmental pollutants) are linked to agricultural practices for implementation of control measures. The control measures include effectively finding and hopefully tackling new forms of multi drug resistant bacteria caused by emergence of ARGs.