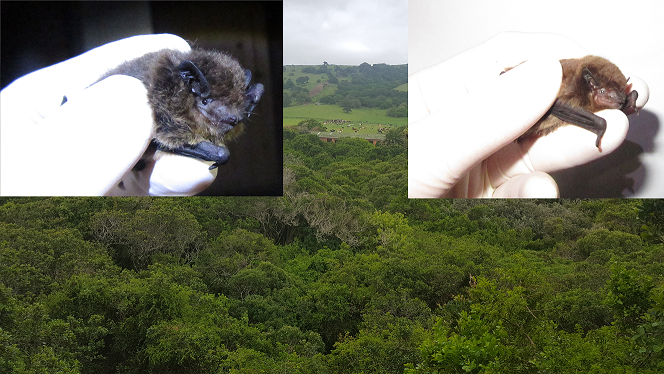 Cape Town – A new study on the dusky pipistrelle bat has highlighted the importance of conserving the integrity and structure of rivers, wetlands, and their associated riparian habitats.

The dusky pipistrelle is a bat that is known to be dependent on forested and well-wooded habitats. At the same time, forests in South Africa are naturally highly fragmented, occurring in small and often isolated patches.

“We found that this bat species is able to use habitat types other than indigenous forest to move between populations on the landscape, which allows for extensive gene flow across the study region, and is conducive to maintaining the genetic diversity of populations,” Dr Monika Moir told the FBIP. The study was conducted in the Eastern Cape and southern KwaZulu-Natal.

The maintenance of genetic diversity between populations is advantageous as it enables individuals to adapt to the environment for the continued survival of the populations.

Gene flow is important for all fauna and flora to maintain genetic diversity and, thus, genetically healthy populations across a landscape.

If a population is unable to respond well to new selective pressures, the risk of localised extinction of the population increases.

Fortunately, this is not the case for the dusky pipistrelle bat. Moir says this species is demonstrating gene flow across the study area, suggesting there is a healthy genetic exchange between populations.

“The important finding here is that they seem to be moving along watercourses (streams and rivers) for gene flow events to occur between the sampled populations,” she says.

Moir says the study’s findings should be used to motivate for increased conservation efforts for the Amatole Mistbelt forests which form an “extensive, connected block of forest”– whereas most forests occur in small patches in South Africa.

“It’s likely that because the forest block is so extensive, it has been integral to sustaining large populations of forest-dependent or forest-utilizing fauna,” she says.

On the contrary, Manubi State Forest is a small and isolated patch that Moir also found important as a source of genetic diversity and migration for the dusky pipistrelle bat.

This forest patch is regularly harvested for wood and plant products and there are no conservation efforts being implemented in the forest.

“The high [bat] genetic and species diversity I found here – and bird diversity a fellow researcher Dr Jessica Leaver found in Manubi – should inform conservation efforts and management practices of this particular forest,” she says.

According to the study findings, urban and agricultural development did not have a significant effect on the gene flow of this species.

“This may be because this species has a relatively large distribution range and wide niche breadth – which means this species is able to tolerate a wide range of environmental conditions, use a wide variety of resources, and is not as dependent on forested/wooded habitats as we initially thought,” Moir explains.

The Eastern Cape is much less developed than other regions in South Africa, therefore Moir suggests that urban and agricultural development across the study area has not reached a threshold beyond which its impact on the movement and gene flow of this species is detectable.

This study is useful in the sense that Moir and her research team assessed the genetic diversity and gene flow of this species prior to large scale anthropogenic development in the area, so it can serve as a baseline for future studies to compare with.