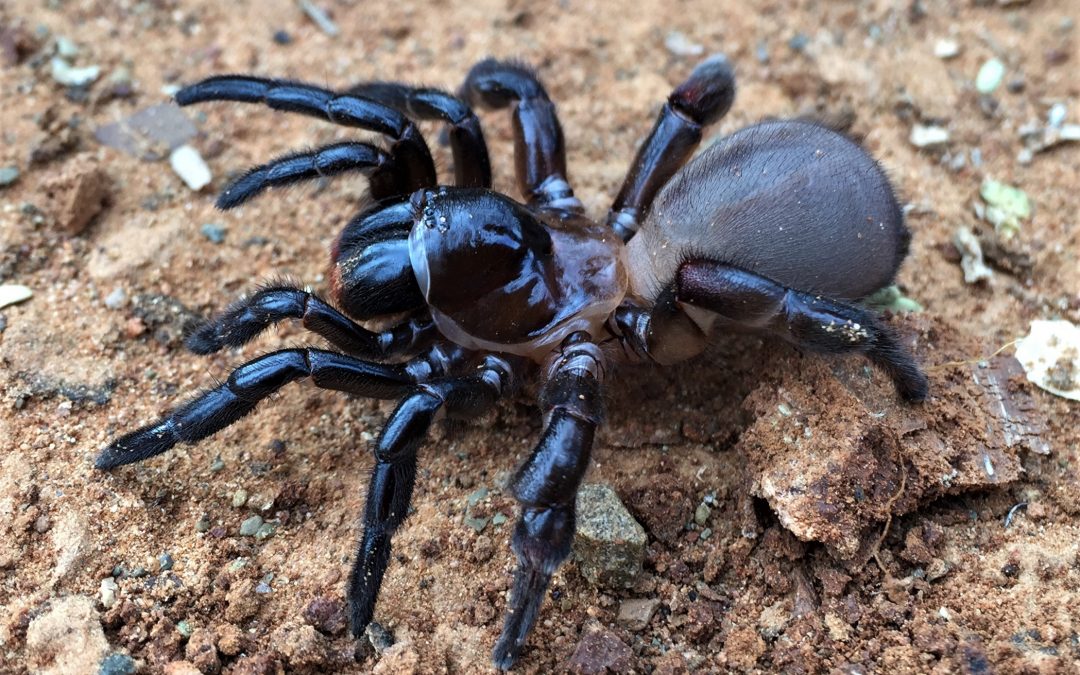 Cape Town – A recent study has drawn attention to the abnormal development of trapdoor spiders in the Karoo, with possible links to the use of chemicals in the region now earmarked for shale gas exploration.

Among other hypotheses, PhD student Shannon Mitchell, a student of Ms Robin Lyle (Agricultural Research Council – Plant Health and Protection) and Prof Catherine Sole (University of Pretoria) suggested that extensive pesticide use during the 1990’s and 2000’s may have played a role in the formation of “teratologies” in trapdoor spiders in the Karoo region.

Teratologies are deformities, abnormalities and defects in the physical development of animals – spiders typically have eight eyes and ‘ocular teratology’ is considered a deviation from the normal ocular pattern.

The study formed part of the Karoo BioGaps Project, a large scale project funded by the Foundational Biodiversity Information Programme.

The Karoo BioGaps Project was to survey the biodiversity of the Karoo which at the time presented large gaps in the understanding of which species occur in particular parts of the region.

This hampered efforts to determine priority habitats that might be sensitive to future proposed changes in land use.

Mitchell believes the study is significant because it draws attention to abnormalities in spider physiology which may have a strong environmental link.

“I think it is important to build up a large body of work regarding teratological issues as when multiple cases can be compared the true underlying reason may be discovered,” she said.

In their paper they discuss some of the reasons why the teratologies may have arisen, such as genetic factors, embryonic injury, developmental injury or environmental factors (such as pesticide use).

Mitchell told the FBIP the findings require much future research but should be taken as a possible cautionary tale when using pesticides and polluting water resources through activities such as shale gas exploration.

These findings allow for further research into what may affect the various aspects of spider development and enlighten experts as to what threats mygalomorph spiders may face.

Mitchell says her idea for the study came about while working on another chapter of her PhD, which included substantial sampling from the Karoo BioGaps area of many different trapdoor spiders and specifically Stasimopus.

For the second chapter of her PhD, Mitchell focused on testing whether geometric morphometrics could be used to differentiate between Stasimopus species or morphospecies based on their differing ocular patterns.

For this, Mitchell had to photograph and digitise the ocular patterns for all the Karoo spider samples as well as the “type series” for each species available in various museum collections.

“While doing this, I started to come across various individuals whose eye patterns differed from the standard – when I realised this was occurring with multiple individuals, I suggested the idea of reporting on this teratological case,” she said.

Mitchell became involved in the Karoo BioGaps project in her honours year (2017) as part of the sampling group for the team working on spiders.

Her role was to survey the biodiversity of Stasimopus in the Karoo through sampling while at the same time sampling other mygalomorph spiders – this project then continued to grow into a PhD study as the material collected over two sampling trips (2017 and 2018) resulting in fairly large research questions.

Mitchell says the whole chapter of her PhD dealing with ‘geometric morphometrics’ has been exceptionally challenging.

Sorting through all the museum collections spiders of all trapdoor spiders was a massive undertaking involving locating only members of the Stasimopus genus. Another big issue was that many of the spiders were incorrectly identified, even at the family level.

This left little hope at the species level, to the point where only type specimens could reliably be used for the study.

“Because of this, well over 500 spider specimens were examined trying to find those in the genus of interest, after that 212 Stasimopus specimens were more closely examined,” Mitchell said.